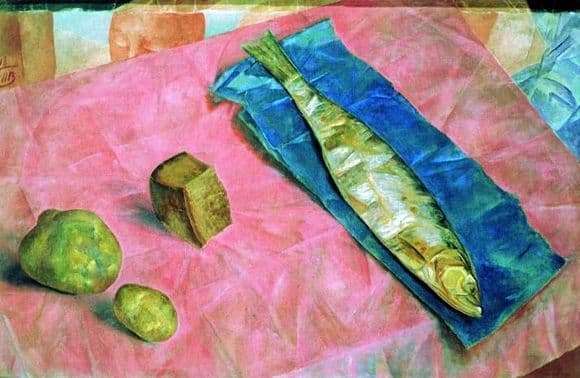 Petrov-Vodkin saw the world in his own way. This was expressed in an unusual perspective, which he liked to choose for his paintings, in their unusual composition and form. Each of his work is endowed with special expressiveness. There are not so many details in the works, but at the same time they are deep and sensual.

The subject of his still life is often food. At first glance, the food is as primitive as possible, but at the same time it is depicted solemnly.

We see a table laid with pink paper instead of a tablecloth. From under the paper one can see the canvas of the artist’s earlier work. In the corner you can even distinguish his signature. Most likely, we are not a table. Just two stools pushed and put a picture on them. That the surface was not damaged, bed this bright paper.

The prospect is surprising in its absurdity. One gets the feeling that the table is tilted in our direction. It seems that even a moment, and all the objects will inevitably roll on the floor. In front of us are a couple of potatoes, a slice of rye bread, and one herring, which is slightly porridge.

By contrast, herring is on paper bright blue. It seems that the author received this very simple ration, which he had been waiting for so long. He brought it to his home and decided to share this simple joy with his friends.

In those days, herring was just one treat that ordinary people could afford. She had time for everyone to pretty much get bored, as they ate it all the time. But, if you really wanted to eat, then this ordinary product also brought great joy.

Petrov-Vodkin depicted quite a few items. But the master was able to convey the features of the whole time. His mastery is truthfulness, honesty, and clearly sensed optimism.