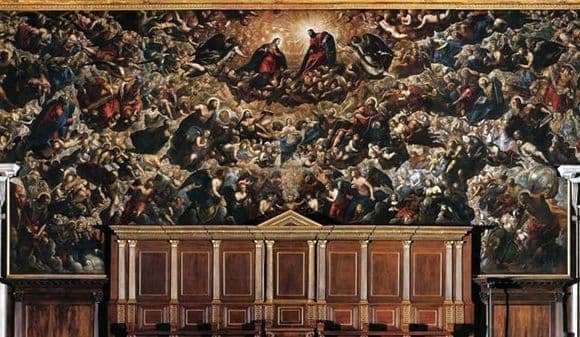 Work “Paradise” is the largest canvas in the world. It is impossible to assume that such an ambitious plan of the artist could be embodied in a smaller size.

Tintoretto depicted real people and angels on canvas. The foreground of the picture is made by humans, and the angels are in sunshine. The shining center scatters the sun rays around, forming a golden glow.

Numerous studies of this work prove the similarity of the plot with the “Divine Comedy”. It is likely that the artist was inspired to create precisely Dante. Many characters look whole and form a single picture, which is quite difficult to do on such a scale.

The work displays about five hundred images, each character is individual, plays a certain role in the composition and is endowed with its own character.

It took about ten years to paint a picture; not only Tintoretto worked on it, but also many of his students. In the picture the characters are systematized, each person is in his place. The picture is more striking scale than the unusual and unpredictable plot.

There are several works of this painting that are considered unfinished, but most critics are unanimous in the opinion of the unique originality of these deficiencies, because the original of this epic is too perfect and this is a minus of the work. “Paradise” is a symbol of the fall of the whole era of the patrician Venice. This work shows all the diversity of the world, people and their characters.

The artist visually reflected the fullness of life with its fall, the presence of the material and the spiritual. It was the interweaving of being and spiritual fullness that was clearly demonstrated by Tintoretto.

The contemplator will find for himself his own hidden meaning in this work; this picture can be viewed endlessly and discover for himself the new philosophical ideas laid down by the author.