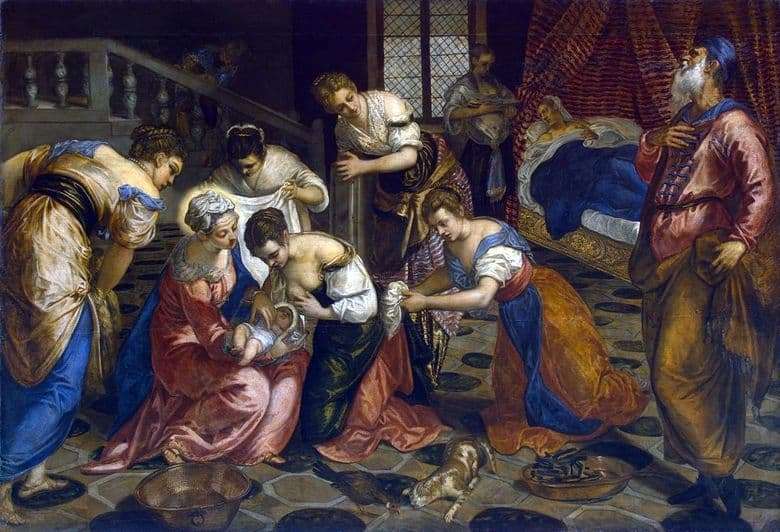 Tintoretto (real name Jacopo Robusti) was born in Venice, in the family of the dyer. Actually, his nickname means “little dyer.” Throughout his life, the artist remained faithful to the artisans’ environment, from which he emerged, living a rather modest life. At first, the boy studied with Titian, and so quickly began to make progress that the great Titian did not want to train him further – he was afraid to grow up an opponent. Nevertheless, Tintoretto imitated his first teacher for a very long time, especially in terms of color.

The main features of the Tintoretto style are a bold pattern, a peculiar distribution of light and shadow, warm colors, and emphasized drama of the composition. Sometimes he was in a hurry in the process of work – and then the paintings were not very successful.

The painting “The Birth of John the Baptist” refers to the first period of the artist. The

canvas is dedicated to the first day of the life of the infant John. According to the Bible, God made mute priest Zechariah after he refused to believe in the appearance of his son. Doubts of Zechariah are clear – both he and his wife were of a very advanced age at the time of the birth of the baby. After the priest inscribed the name “John” given to the baby, the gift of speech returned to him.

The master has thoroughly and thoroughly reproduced the bustle that begins in the house after the birth of the child The attention of most of the characters is absorbed by the newborn itself – it is held by Maria. The only thing that distinguishes the saint from other women is a thin nimbus above the head and the traditional colors of the clothes – scarlet and rich blue. The nurse has bent to the child, she offers the baby a breast. The mother herself lies in the depths of the room on the bed; other women bother about her. The white-red cat sneaks up to the chicken and is about to grab her. The artist’s expressive and vivid paintings convey the moment as well as possible. Today, the painting The Birth of John the Baptist is in the collection of the State Hermitage Museum.