Home ⇒ 🎨Tintoretto ⇒ Description of the painting by Tintoretto “The Miracle of St. Mark” 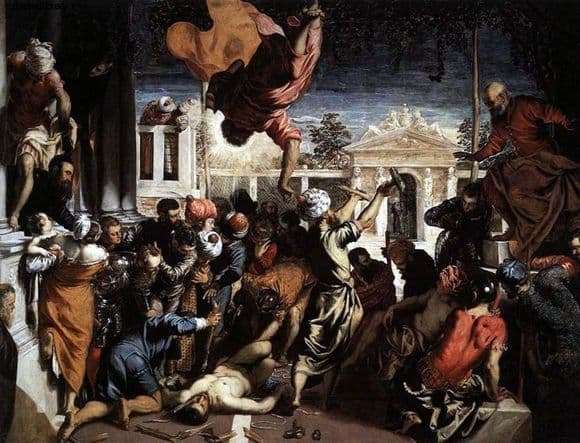 The picture depicts the phenomenon of a miracle. When early Christians spread their faith around the world, it often happened that pagans did not want to listen to them. So one of the young apostles fell into the hands of a cruel king, who laughed at him and sentenced him to quartering. However, when they decided to carry out the sentence, it turned out that the body of the young man had become invulnerable to axes and the executioners believed in fright.

The picture depicts the moment when people realize that something wrong is happening, something that should not happen.

The preacher lies on the stones, his eyes are closed, and around him are the splinters that were left of the weapon. Around him stunned people. One of the executioners, a dark-skinned, in a turban, shows the people in their raised hands with an ax and an ax, the rest are on their knees, their faces buried in the ground, and around the movement. People are drawn to look at the miracle. The composition is typical for Renaissance paintings – it is clearly geometric.

Its center is static and determined by the body lying down. On the left and right sides, the movement animates the picture, makes it dynamic, balances the static. Only the sharp movement of St. Mark from top to bottom, his outstretched hand, is not typical. He appears out of nowhere, his head shines with light, clothes are flying around him, and the very movement as if breaks the composition, deprives it of integrity, and at the same time strangely balances.

Faith triumphs. In the distance, you can see the mountains and the museum with statues, you can see a tree and a very pale blue sky turning into a pre-storm heaviness.

Miracle does not look fun or joyful. It is filled with a frightening sense, calling not to love God, but to submit to it. Do not fall to the edge

Yu clothes in awe and trembling, and buried his forehead in the dust, kneeling.

This miracle is the triumph of Christianity over paganism, but in the picture itself there is something threatening and oppressive.