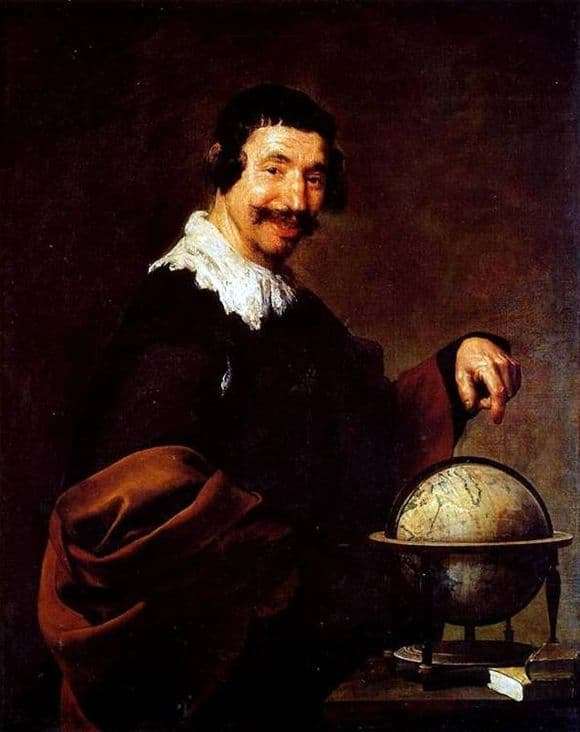 The artist from Spain Diego Velázquez wrote in 1629 a portrait of Democritus. Some art historians believe that the picture was created under the influence of Rubens. In any case, there is no reason to deny the skill of Velasquez in this beautiful piece of art.

Democritus lived in ancient times, before our era, in Greece. Belonged to the representatives of natural philosophy. The Spanish painter depicted the philosopher in uncharacteristic clothing for his era. Democritus looks in the picture as a contemporary of Velazquez. He is wearing tailored clothes, white elegant collar. So the ancient philosopher is getting closer and clearer to lovers of paintings by Velasquez in the 17th century.

The ancient Greek philosopher was shown to us not by a wise gray-bearded old man, but by a man full of enthusiasm with an adventure in his eyes. Democritus was known as the “laughing” philosopher. He was amused by the actions and

views of his contemporaries. The portrait easily reads this famous sarcastic grin.

On canvas, the background is painted with a thick layer of brown oil paint. Illumination falls on the figure of Democritus and the objects on the table. The philosopher points with a finger of his left hand to a large globe placed on a table. He traveled a lot, so this item perfectly emphasizes the personality of the character. Nearby are books, showing the person depicted as inquisitive, intelligent, deep-minded.

The folds of fabric on clothes are superbly designed. The picture is also perfectly made from an anatomical point of view. The hand of a man, his face with mimic wrinkles, mustache and hairstyle are depicted with great care and detail.

The ancient philosopher lived as a hermit, but Velázquez presented him as very pious. Elegant gentleman looks at us from a portrait, thinking over the discovery of the next law of philosophy.

The painting is in French Rouen, in the Museum of Fine Arts.