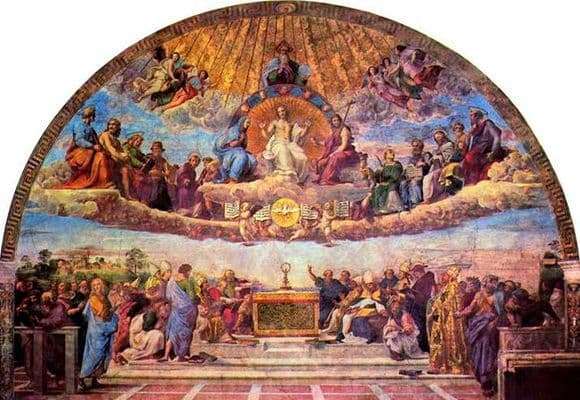 Artist Raphael was known for his work since his youth. Being a novice artist, he was invited to a prestigious workshop in Rome. In the Renaissance, Raphael was one of those who made a special contribution to its development. The painting “Dispute” adorned one of the great monasteries.

The action in the picture unfolds between the two kingdoms: the earth and heaven. From above, the holy trinity descends to the people: God, his son, and the holy spirit. It can be seen how Jesus Christ towers on a throne with his baptist and mother sitting on either side of him.

Next on the sides are all the gospel prophets. This is Peter, and John, the Evangelist and others. Celestials are in a serene state, having fixed their eyes on people who are swarming from below. It seems as if their movements are visible. Confident and unhurried.

Below, the artist presents the kingdom of people who stand in anticipation of the deity descent from heaven. In the middle is the altar, on which are various gifts.

The whole composition is located on the semicircular part of the dome. She ideally served for the full deployment of the creation of Raphael. This is especially contributed to the vault of heaven, depicted in the picture. It turned out realistic. It seems as if instead of a dome at the top there are really real clouds, and from them the holy trinity descends into the monastery.

A special feature of this composition is the church under construction depicted by Raphael aside. The artist, thus, demonstrated the future Cathedral of Peter, who while working on the image was at the initial stage of construction.