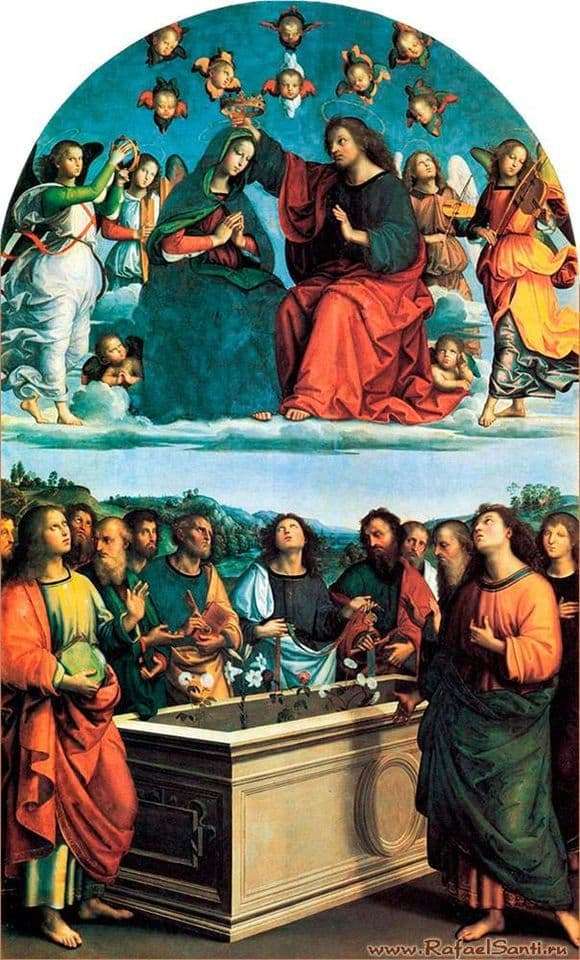 The work was written in the years 1502-1503 for the altar Oddi. An interesting fact when creating this canvas was the fact that the artist did not independently determine the main components of the image. At the same time, his favorite religious subjects at the early stages of creativity found their admirers.

Speaking of the upper part of the canvas, there is a certain borrowing of silhouettes from the work of Perugino’s “Ascension of Our Lady”. At the same time, Raphael gave preference to careful writing of the altar arrangement, as well as to persons and other important religious elements located in the work. Thus it is possible to note the impressive superiority of the student over the teacher.

In this picture you can see the acquaintance of the creator with the beautiful elevations of Rome and Florence. As you know, Raphael was an avid traveler, wanting to enrich his spiritual world and dissolve

into the deep majesty of the surrounding. A similar manner affected his work.

Considering the work, it is impossible not to draw attention to the minimalized difference between the so-called participants of the canvas. Thus, the artist wanted to emphasize the idea of ​​the closeness of the soul of the Christian to the saints.

Traditionally, Maria is represented in a blue cape that covers her head. On the sides are the angels and patrons. Contemporaries described their feelings after viewing the picture, talking about the presence of a feeling of lightness and “airiness”, and musical instruments on the upper tier of the canvas seemed to give a melody of calm through an image. They are presented in the picture as a solemn element, with the help of which Mary is met in the sky.

The lower tier of the picture is presented in the form of waiting. Christians oversee the process of coronation, putting aside their usual business. Here you can say about the unity of people thanks to Mary and her importance in religion.