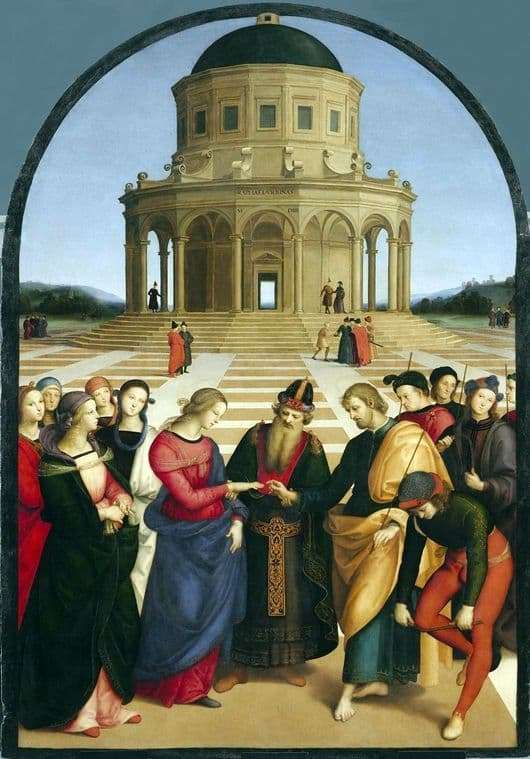 The panel “The Betrothal of the Virgin Mary” ordered specifically for the chapel of St. Joseph.

According to scientists, Raphael was inspired by two compositions created by his direct teacher, Perugino.

Rafael pointed out directly on the temple depicted in the picture of his own name, as well as the date. That historical moment is captured when Joseph puts Mary on a ring on her finger. In his hands we see the staff, which is the symbol of the election. It is noteworthy that he blossomed in him, while others did not. We see two who are disappointed and break the staff.

The structure of the composition is created by a polygonal temple. He dominates everything. It is the temple that determines how all the figures and the main group are located in the foreground of this picture. The painter creates a special radial system with the center – the temple. If the viewer looks into the distance through numerous arcades and doorways, he has the impression that this system has a logical continuation on the other side of this building filled with grandeur.

The composition has a circular structure. This rhythm is repeated by the group of guests of this wedding.

As for the color range, it is worth noting that mostly brownish and golden tones are used with some blotches of other colors. The figures of all the characters are very bright. It seems that they are in a very clean atmosphere. Its creation is greatly helped by the light blue sky.

The structure of the creation of Raphael is in many ways similar to the work of his teacher Perugino. Unlike the horizontal composition, they have a circular structure in Raphael. It is this particular composition with the building of a polygonal type and a group of figures that completely distinguishes the work of Raphael from the works of his teacher. The whole space in the artist’s picture is more open, and the perspective itself is depicted with the greatest skill.