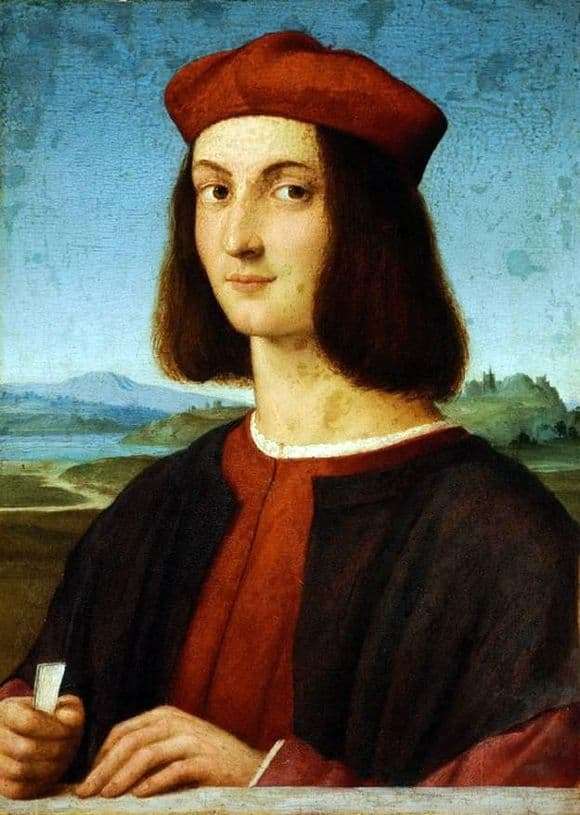 Rafael Santi’s portrait work for obvious reasons has been largely lost, but especially valuable specimens, such as the portrait of a young man, remain under the strict supervision of the world artistic community, as they represent exceptional artistic value.

The fundamental difference in his work after meeting with Leonardo da Vinci is felt in most portraits. Deep psychologism endowed his work of the Roman period. The internal state of the young man being portrayed is thoroughly reflected. His deep, curious gaze seeks to embrace everything that a young man gives to a man.

The young man in the red beret humbly folded his hands on the stone table, but his slyly folded lip crease shows how powerful the energy is in the young man. For the artist himself, it is encouraging to portray a young man, full of hope and determination for the most risky accomplishments. The local colors used in his image harmoniously echo the bright, rich color of the surrounding nature, as unrestrained and wide as youth itself.

Balance (both color and structural) composition of the portrait does not give rise to doubts about the artist’s skill. The landscape against the background of the young man harmoniously combines with such connecting elements as, for example, a winding path from the river that looks like the mouth of the river itself, it seems to “flow” directly from the quiet water surface, which at any moment pour strength over the plain.

Rafael Santi realizes in his romantic hero the best that created the era of weighty revival, in his young, but full interest in the world of the person, the exceptional ideals of that time were written, cherished by the artist himself throughout his entire creative life.