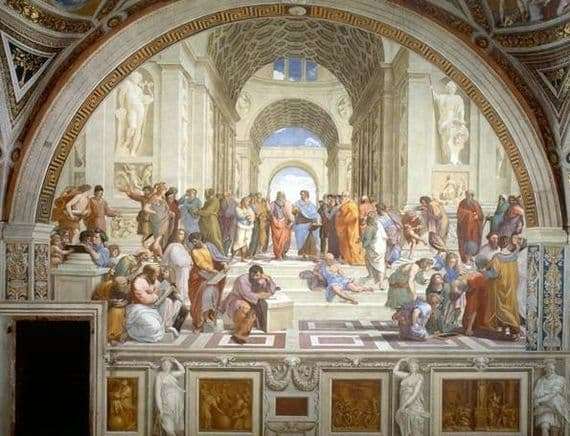 Raphael Santi (1483-1520) – the great Italian painter and graphic artist. The fresco “The School of Athens” is one of the four frescoes for the Papal Palace in the Vatican, painted by the great Raphael in the High Renaissance. The sophistication and smoothness of the lines, rounded contours, complex poses, angles and rhythm balanced compositional formulas are combined with each other on the fresco of the great Master.

Earthly human activity, the harmony of the physical body and spiritual content on the pompous architectural backgrounds of the palace, an impeccable sense of rhythm and proportions. It is hard to believe that the 25-year-old representative of the Umbrian School of Painting with a predominance of the principles of the early Renaissance was able to perform such a global work. In his fresco, Rafael Santi united all the philosophers and thinkers known at that time, from Diogenes, Heraclitus and Epicurus to students of Plato and Socrates. In total, the fresco depicts over 50 figures. Titan personalities, personalities equal to God, according to the worldviews of the Renaissance.

The Academy, created by Plato in Athens in the 4th century BC, served as a prototype for the “Athenian School”. e., whose students held their debates under the open sky in an olive grove. In a beautiful, ancient temple with airy and bright architecture, truth is born that will triumph over man, like the bright blue sky seen in the system of arched vaults over the heads of philosophers. “Truth is born in controversy,” said the ancient Greek philosopher Socrates. Philosophers on the fresco also argue, but without designating the winner. A variety of personal human opinions and individual philosophical trends were combined and depicted on their fresco by Rafael Santi.

“The Athenian School” is a true heritage, which the artist Santi left for his descendants, instructively demonstrating correct and full-fledged human activity.