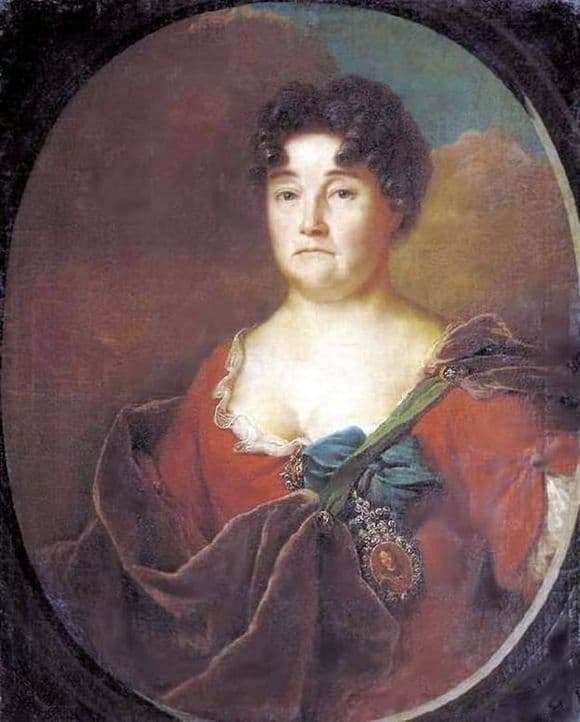 This portrait was written in a pair of the portrait of Prince Golitsyn himself, because it was intended that they would hang side by side and symbolize the consonant pair. The princess is depicted in a half-turn to her husband, inscribed in the canvas to the waist. She looks very majestic, as befits her status. Behind her is a cloudy sky. The princess is depicted in an oval on a rectangular canvas. She painted a luxurious heavy dark red dress, its color seemed to shine. On it you can see large buckles made of rubies on the wrists, as well as a beautiful precious medallion on the chest.

This medallion clearly shows the image of Peter the Great himself. Mantle thrown over a gorgeous dress pretty picturesque. Most likely, the mantle was made of velvet. Her appearance and clothes are so majestic that they seem to fit together more than her inconspicuous spouse in her life. The head of the princess is depicted in volume and this artist

tries to emphasize so that her sculptural power and weight can be seen.

At the same time, the dress opens the entire neck and part of the chest, occupying a considerable place on the canvas, thereby forming a rather picturesque part and conveying the image of a strong and independent woman. However, gorgeous clothes do not look very well against the background of lowered corners of the lips, as if waiting for crying, and sad tired eyes. The combination of these two moments creates a fairly strong and truthful image of the Princess, in which lies the special depth of this woman. She was also an approximate foxeater of Catherine herself, after she was excommunicated from the court on insignificant occasions and again brought closer.