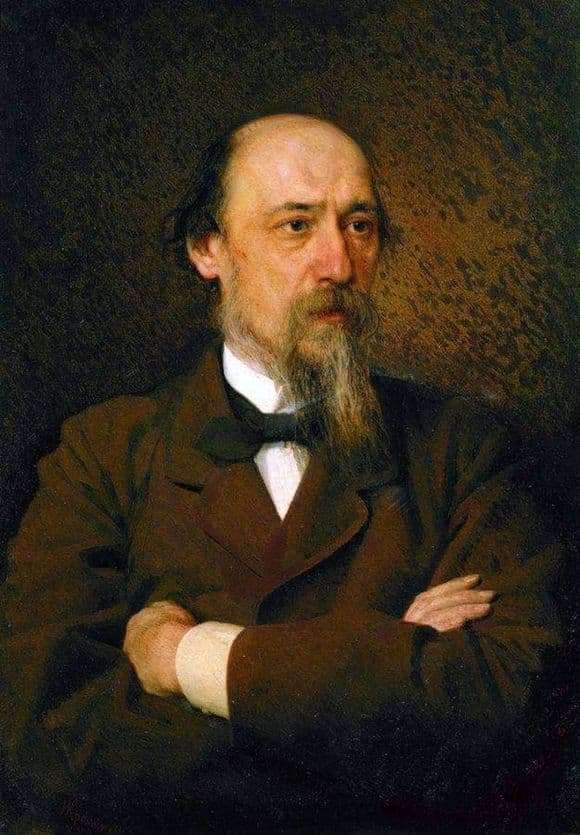 Kramskoy is a Russian master of a genre, religious and historical portrait, who was able to transfer human faces to a host in the era before the widespread distribution of photography and keep them there for centuries. He wrote a lot, preferred realism to all other genres, often turned to Russian history as a source of inspiration.

A portrait of Nekrasov was ordered to him when the poet was already seriously ill and could not bear the lengthy work on the portrait. His model could be only 10-15 minutes a day, which is negligible for the portrait, and the only support in such difficult conditions for the poet was an old photograph given to him by the relatives of the patient. Combining the letter from nature and the letter from the photo, Kramskoy created one of his typical portraits, which for himself was elevated to practically the rank of a separate genre.

For such portraits was characterized by a dark background with

which the clothes depicted usually merge. Nekrasov’s brown frock coat, his black butterfly is no exception, the background gets into tone and is only slightly lighter. Neither clothes, nor hands were worked out in detail – they were just a part of a person, but they didn’t pay special attention to them – but the artist concentrated all his forces on his face. Lighting it with an external source of light, approaching the image of his features carefully and carefully, Kramskoy carried the person to the picture as it was at rest.

No extra emotions on the faces, just a focused look a little to the side. So Nekrasov – with his beard, light wrinkles, with the eyes of a man who saw life from the inside and found it rather entertaining – looks to the side and seems lost in his thoughts. Maybe he thinks about death, maybe about the future, which he may not have, maybe he remembers the past or thinks about another line of verse.

However, it is also possible that there are no special thoughts behind his eyes.

Only a frozen, concentrated eternity in which it is immersed as it once was – many years ago.