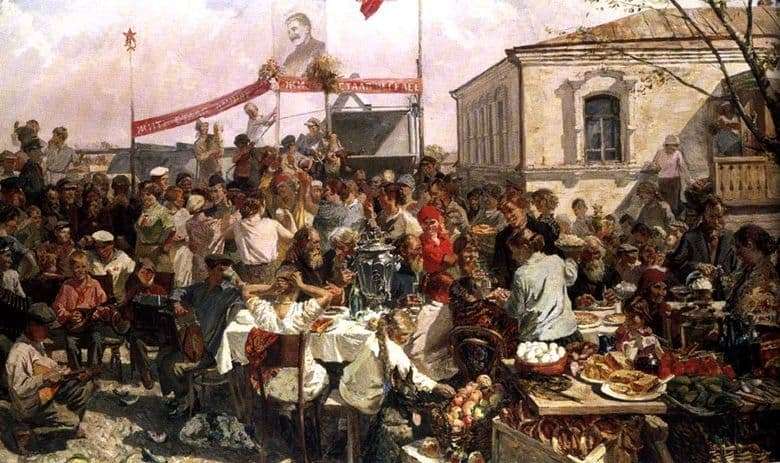 The son and grandson of icon painters, recognized as a party by Soviet artist Arkady Alexandrovich Plastov, is known for his peasant paintings, which reflected the life of the working village.

One of these paintings is the Kolkhoz Holiday, first presented at the Industry of Socialism exhibition in 1937-1938 and bringing great popularity to Plastov. The canvas attracts with its bright colorful and massive.

For this work, the artist made about two hundred sketches of simple collective farm workers, for this reason they called her a large portrait of the Russian peasantry. In it, the author shows an episode from the post-war life, in which the objection of that former joy and peace before the Great Patriotic War is felt, she agitates for happiness, calls to continue to live.

In the center of the picture are festive tables with all the village dishes, on one of them stands one of the symbols of the Russian village – the samovar, which treats everyone with hot tea. A banner over which the portrait of Joseph Vissarionovich Stalin, shouts to the whole district “Life has become better, life has become more fun.” And really – in the picture there is a day off, maybe it’s a holiday, people are happy, they dance, they sing, they just talk, everything terrible is over.

The picture after publication had a long history – Plastov after the XX Congress of the CPSU, the party asked to remove the portrait of Stalin from the picture, but the artist flatly refused, arguing that initially the presence of this portrait was not intended, but he was persistently asked to put the same party there, so clean he is not going to him, the path remains there forever.