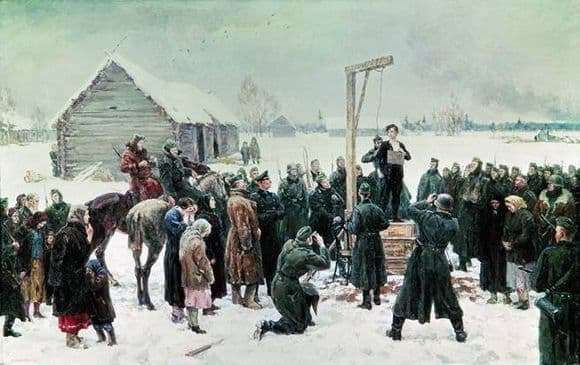 During the Great Patriotic War, the artistic group worked on several paintings. The works are especially tragic, conveying some part of the story, the atmosphere of fear of those times.

“Tanya” is also an unusual work. It should be said about its origin. In winter, at the end of January 1942, an article about the heroic death of a young partisan named Tatyana was published in the Pravda newspaper. She was amused by German soldiers in a small village Petrishchevo, located a few dozen or hundreds of kilometers from the capital.

The artists were greatly impressed by the picture of the heroine, which clearly showed the head of the victim with a dangling noose around his neck. Then the creative team got excited about the idea to create a picture in memory of a bold woman who turned out to be the capital’s Komsomol Kozmodemyanskoy Zoya. They decided to capture her brave deed so that future generations could

admire the courage and stubbornness of the Russian people in the person of one national heroine.

The young creators went to the settlement of Petrishchevo, aiming to find and talk with people who were observing the crime committed against Zoya. They managed to find out many details: how the girl was severely beaten, tortured, and chased naked to the cold. The girl proudly moved to the location of their forthcoming death, bravely looked into the eyes of the Nazis, while retaining the patriotism and intransigence.

So the work of Kukryniksy “Tanya” appeared – this is how the young Moscow partisan called herself.

On the canvas you can see a wooden plate with the inscription – this is also part of the story, in fact, the girl was wearing a similar one, she was drawn on “Housebreaker”. The picture conveys exactly the moment before the execution, where the Komsomol member Zoya Kosmodemyanskaya reads a speech, urging the people to fight.