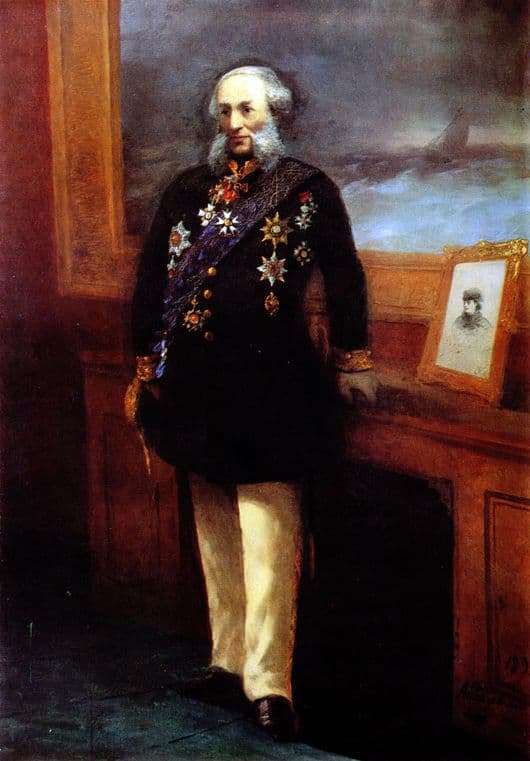 There are several self-portraits in which the great artist depicted himself. On this canvas, he is depicted in the last years of his life. Having achieved universal respect and recognition, the majestic image of the master brush is presented to the viewer. On his nature and character says posture and facial expression.

A kind and pleasant smile, expressive eyes, looking thoughtfully into the distance, give him a gentle, respectable, self-confident person. Satin ribbon and orders reflect difficult periods of life, his victories and defeats, honor and bravery, shown in battles not only with others, but also with himself.

If you take a closer look, then in the background is the picture “Storm on the Sea at Night”, which personifies the artist’s love for the sea. On canvas, strokes are drawn, perhaps the last moments of the life of the ship. Passion, anxiety, fear, caused by the wrath of the elements seem to express their thoughts and feelings to creativity.

On the shelf, a light brush strokes a portrait of the artist himself in his youth. The turn of the head, directed towards the canvas, again conveys the love of the sea.

The second portrait was written at an earlier age, when Aivazovsky was just beginning his career. In the eyes of the visible passion and a lively mind to study and observe. Many of his contemporaries noted in the master the talent to memorize. Seeing the time, accidentally caught the moment, he did not run to the colors.

Only after long hours of fermentation through the streets of the city and mentally completed paintings sent the artist to create in his workshop. A slight smile speaks about the openness of a person, but a posture warns of alertness and readiness not to be offended. No wonder the first picture shows the Order of the White Eagle and the stars of Vladimir the Second. The eagle was given for services to the motherland, its motto was: “For Faith, Tsar and Law.”