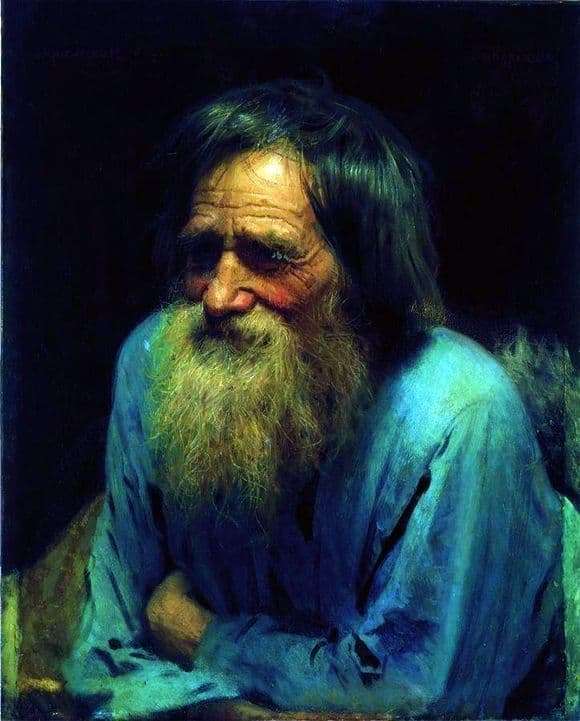 The painting “Mina Moses” was painted by I. N. Kramsky in 1882. She was a kind of sketch for a larger canvas “Peasant with a bridle” created a year later. The portrait of Mina Moiseyev is considered the best work of the artist.

In search of the protagonist for the new picture, the artist went to a remote village near Petersburg, where for several weeks in silence and solitude he worked on a portrait of an ordinary Russian peasant. Wonderful artistic talent helped the portraitist escape from the rules and attitudes adopted when writing this kind of paintings.

In the foreground of the canvas were the generalized features of the Russian peasant: a wrinkled face, frowning eyebrows, fluffy gray beard, strained hands.

It seems that the person in the picture is extremely tired, broken by work and hard life. In fact, this is far from the case; after looking closely, the viewer can see that the old man in the picture is sufficiently wiry, well built, his look is stern and stubborn. He will live a lot more in this world and will apply the power of his powerful hands to many things.

The old man’s pose in the picture is relaxed, his arms are crossed and pressed to his chest, he looks somewhere to the side past the artist, as if embarrassed by his unusual position. In the corners of the old man’s eyes, a spark of mischief froze, his face covered with wrinkles, but this fact does not spoil the general impression.

The old man is dressed in a blue canvas shirt not the first novelty, but even in it he looks very impressive and even monumental. The viewer cannot understand how good this old man is, how much he has seen good and bad in this world, whether he is satisfied with his life, whether he is pleased with the artist’s actions, or he was forced to agree to writing a portrait.

All this picture can not convey the power, but thanks to the skill of the artist the viewer are available all of the above character traits of this person.