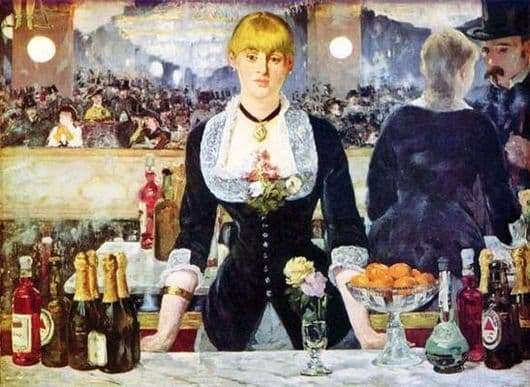 Painting Manet, in question, has become one of the most famous artistic works of art. The canvas depicts one of the most famous cabarets of Paris, the end of the nineteenth century. This is a favorite place of the artist, prompted him to write one of his masterpieces, depicted this institution with a brush. Why did he like to go there so much? The vivid life of the capital was Mane’s preference over a calm everyday dimension. He felt better in this cabaret than at home. Sketches and blanks for the picture, apparently, Mane did right at the bar. This bar was located on the first floor of the variety show. Sitting to the right of the scene, the artist began to make blanks to the canvas. After that, he turned to the barmaid and his good friend, asking him to pose for him, in his workshop. The basis of the composition was to become a friend of Man and a barmaid, facing each other.

They should be passionate about communicating with each other. Found sketches of Manet confirm this idea of ​​the master. But Mane decided to make the scene a little more meaningful than it was. In the background was a mirror showing crowds of visitors filling the bar. Opposite all these people, there was a barmaid, she thought about her, being behind the bar in the bar. Although there is fun and noise around, the barmaid has nothing to do with the crowd of visitors, she hovers in her own thoughts. But on the right you can see, as if her own display, only she talks to one visitor. How to understand this? First, the reflection of the bartender should be in another place. In addition, her posture in the reflection is different. How can this be explained? Apparently, the picture in the mirror is the events of the past minutes, but in reality it is shown that the girl thought about the conversation that occurred a few minutes ago. On the marble stand and in the mirror, even the bottles stand in different ways.

Reality and reflection do not match. Although the picture is very simple in its plot, but it makes every viewer think and think out something different. Manet conveyed the contrast between the cheerful crowd and the lonely girl in the midst of the crowd. Also in the picture you can see the society of artists, with their muses, aesthetes and their ladies. These people are in the left corner on the canvas. One woman is holding binoculars. This reflects the essence of the society, who wants to look at others, and will exhibit in front of them. At the top of the left corner you can see the legs of the acrobat. And the acrobat, and the crowd of merry people, can not, brighten up the loneliness and sadness of the bartender.

The game of black colors distinguishes the picture of Manet, from the works of other artists. It is very difficult to get black to play on the canvas but Mana succeeded. The date and signature of the wizard is displayed on the label of one of the bottles, which stands in the lower left corner. The peculiarity of this picture is Manet, in its deepest sense, set of symbols, and secrecy. Usually, the artist’s paintings did not differ in such characteristics. The same picture conveys many depths of human thought. In the cabaret there are people of different origin and status. But all people are equal, in their desire to have fun and have a good time.