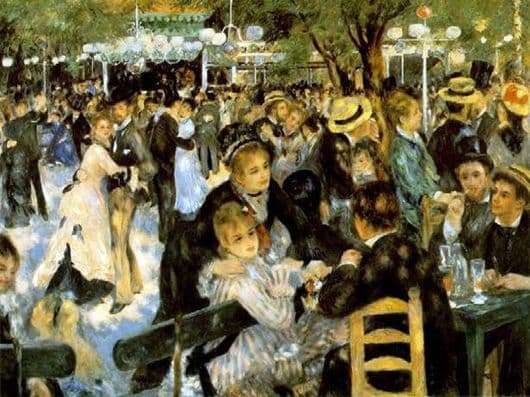 This is one of the most popular places in Paris in the late 19th century. Young and careless people flocked here and were given fun: dances, drinks, acquaintances. Balls were arranged not so often, but still regularly and that is why this entertainment became popular among the simple class of Parisians. Exactly one of such balls was captured by Renoir and made it so successfully that the canvas was a success at the exhibition of the artist’s works.

Innovation in this canvas is that it is made in a very unusual style. Just do not think that the artist did not finish something and at all, what a stain. This is the sunlight that penetrated the dance floor through the trees. It was precisely this that at first irritated some, and then the passions subsided and everyone understood how this animated the picture.

It seems that everything moves: couples are dancing, sitting at the table talking, smoking. But the most interesting thing about the film is that some of its participants most likely purposely posed for the artist, especially one of the dancing couples. Then the camera only – only came into vogue and therefore was not so popular, but the artists were snapped up.

And most likely Renoir wrote this canvas, while at this ball. But we must bear in mind that at that time the artist was no longer young, and therefore it may be that everyone paid attention to him.

And by the way, he practically never sketched sketches, that is, he worked right away, without searching and thinking. This is of course risky, because you will not immediately understand what exactly needs to be written and what will come of it. But it almost always turned out great.

At least, this canvas is among the ten best works of Renoir and at auction is quite expensive.

And another thing: thanks to Renoir, we can know how young people were having fun at that time. Balls are the most wonderful pastime. Almost fabulous.