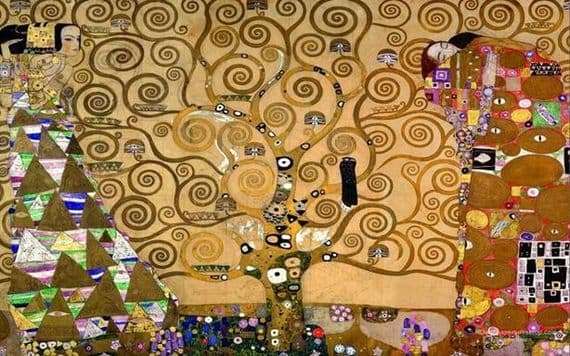 The creation of this canvas is associated with the name of the magnate Adolf Stokwe, who in 1904 decided to build a huge family. At that time there was a fashion to draw pictures on buildings and inside them, so the Viennese industrialist invited several artists (including Gustav Klimt), offering them a contract.

The industrialist was fond of Japanese art, so Klimt decided to draw the appropriate picture that would complement the overall design. As a result, the famous “Tree of Life” appeared, consisting of three elements – expectations, ecstasy and the very tree of life.

The name carries a symbolic meaning and encourages the viewer to think: perhaps the artist tried to depict the biblical tree of reason or illustrate the family tree of all humanity. The branches of the tree can be attributed to the symbol of infinity – the branches meet and intertwine with each other, creating a real maze of leaves and unusual decorations.

More attentive viewers can detect a large number of triangles, squares and ovals. Experts say that these characters in the Japanese are considered masculine and feminine. Europeans associate these symbols with the works of Sigmund Freud (it is worth noting that Klimt read his works). Who knows, maybe this great Freud inspired the artist to create such an unusual picture.