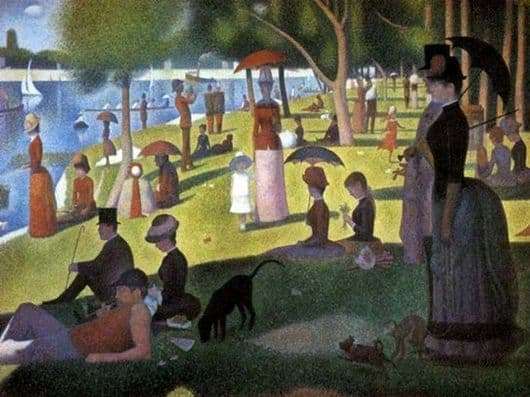 Landscape directions pointillism, painted in oil on canvas. In this landscape, the artist used a new technique of painting pictures. He does not mix colors, but applies them in monochrome, in places one on another. Smears lay accurately, smoothly, carefully. All colors are harmonious, concise and sustained.

This picture caused in its time very contradictory responses from critics and public opinion. It’s all about the depicted figures of people. The artist does not draw faces. All silhouettes are clear and bright, but when you look at faces, you see only a blurred, unformed image, in which facial features are vaguely guessed. Because of this, all the characters look like frozen unnatural dolls, mannequins. It is this feature that has been criticized by society.

However, the artist himself explained that it was natural for him. After all, you can look at the faces in the theater. And in the picture the main thing is not this, but the inner spiritual component, the subtext, which everyone sees in his own way. The essence of the image in the picture is reduced to the rest of ordinary Parisians on the banks of the Seine River on the island of Grand-Zhatt. The landscape captured the weekend Sunday summer day, in which everyone wants peace, tranquility and a pleasant outdoor rest. Someone walks with his second half, someone with children, some with dogs.

In one section of the picture, there is a fragment of a picnic in the air, in the other, admiring boats and ships on the river. Ladies take refuge under umbrellas, which indicates a bright, most likely noon, sun on this day.

The color scheme of the picture combines violet, lilac, yellow, red, white and green shades. Therefore, the landscape is quite bright and saturated. In general, the impression of the picture remains positive. One feels bliss, idleness, some sleepiness and laziness of the day off.