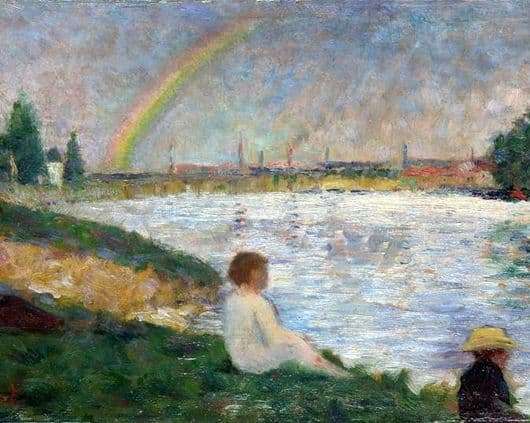 Georges Seurat was sure that the color is easily manageable, which we see in his works. On the canvas called “Rainbow”, was used quite an interesting method. Seurat made one device that resembled a circle, the artist applied all 7 colors of the rainbow on it, which were interconnected in semitones, intervals between the primary colors.

For example, between red and yellow, red-yellow was applied. On this ring there was a special rim, which should be white, so this light was mixed with all the other colors of the circle, and as a result the artist obtained a full range of all colors and shades, which he successfully used. Thanks to this device, this picture turned out, with the maximum use of all semitones.

On the canvas you can see how the master managed to expose all the colors of the patterns, thanks to which the picture turned out to be surprisingly vivid and natural, thus, the interaction of colors turned out most successfully.

In fact, on the canvas, you can see three children sitting on the banks of the river, most likely they are going fishing, although the gear is not visible. In the distance, roofs of houses and treetops are seen, and a rainbow sprawls over them, delighting with its flood of flowers, but the boys on the shore do not care for it, they are busy with completely different things.

Due to the fact that the artist was able to create a fairly convenient system to achieve a particular color, he uses his skill, as well as possible, and during constant lighting, the color effects in the picture will play in new colors.

The water on the canvas surprisingly accurately reflects the sky and even the far-reaching tops of chapels, churches, temples. Smears are very measured, so maximum realism is achieved.