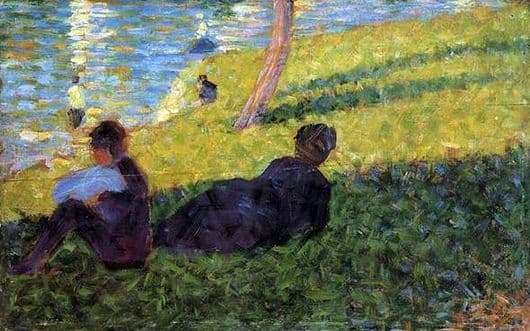 Impressionism is characterized by a passion for intuition, inspiration and premonition, as the basis of work. Pictures of impressionists are penetrated by light, narrate about one frozen moment, and are built on feelings, but not on mind.

That is why Seurat is called neo-impressionist – in many respects following the spirit of impressionism, letting the same sunlight into his paintings, he acted rationally, logically and carefully. It was under his brush that the technique was born, which was later called pointillism – a method of applying paint, in which only pure colors are used. One stroke – one color. The maximum that is allowed is to mix them with white.

This technique is difficult to perform and gives excellent results. She can convey a lot – for example, summer day, happy and bright, as in the painting “Man and Woman”. It is very laconic – on it is the river bank, green soft grass, which beckons to lie down, a lonely tree, two in the grass look at the peaceful flow of water.

A man sits, pulling his knees to his chest, his posture expresses thoughtfulness and detachment. A woman is reclining with a support on her elbow – her hair is tucked away in a bun, the pose speaks of lazy interest, that something has attracted her gaze, but she likes to lie too relaxed to sit down and look better.

The whole picture is saturated with the brightness of flowers, it very accurately conveys summer afternoon and bliss, which covers anyone who decides to rest on the river bank in the heat. It is necessary to turn away from the picture, and it seems that the woman will now again fall back into the soft grass, close his eyes, and the man will sit, watching the waves and the rare leaves floating on the river, admiring the reflections in the water, looking ahead of him distractedly and pretty.

The instant – good, imbued with silence and the sun, forever froze in the stillness of the picture.