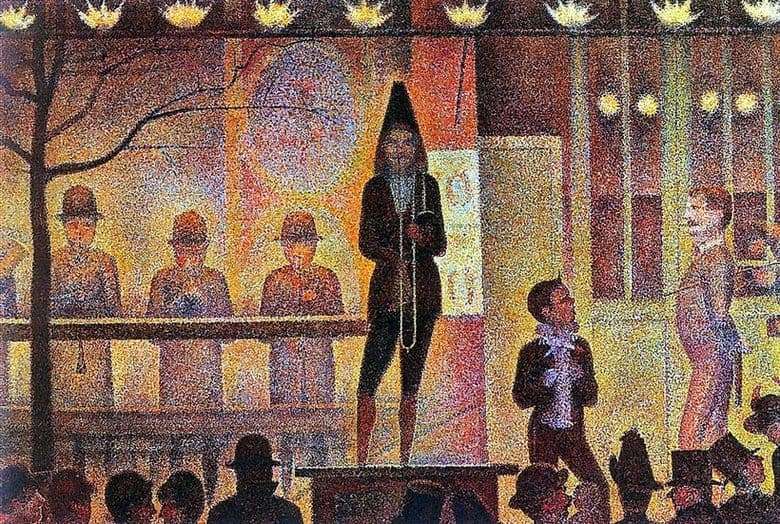 Georges Seurat is one of the well-known representatives of the current of pointillism. The essence of this direction is to create paintings using separate strokes of the dotted form. When looking at the image at a distance, small dots merge into a single whole, forming a finished picture. One of the examples of works in the style of pointillism is the painting “Parade”.

On the canvas, the artist depicted a parade in the Corvi Circus. The parade takes place in the evening with artificial lighting. The central figure of the composition is a circus artist with a trombone and a triangular cap. He stands on the podium in the open air in the middle of the street and invites the audience. To the right of the trombonist you can see the director of the production and the clown, to the left in the full face are the musicians.

At the bottom of the picture in front of the podium are the spectators who are animatedly talking to each other. In the extreme right part of the canvas you can see the queue for tickets. Near the ticket office with green doors, tickets are bought by a woman and a young girl, depicted in red and orange colors. On the perimeter of the entire top of the canvas painted gas lamps.

The canvas consists of many small dots of yellow, green, red, orange, brown and purple. With the help of dotted strokes, the artist masterly drew a real masterpiece.

“Parade” was the first picture of Seurat with a plot about a holiday and dark time of the day. The picture was first presented to the public at the French exhibition of the Salon of Independent in 1888. Many critics did not accept this canvas because of the lack of depth and perspective characteristic of Seurat’s early works. However, “Parade” has established itself as the most mysterious work at the exhibition.