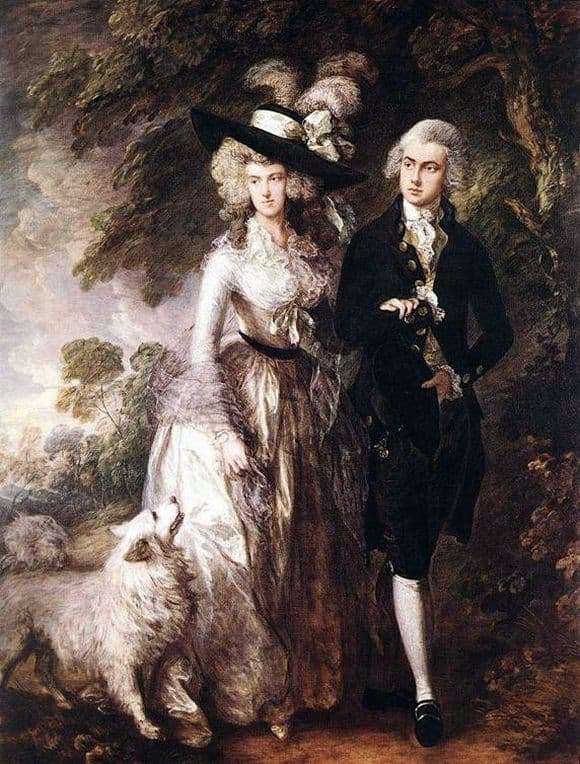 The canvas was created in 1785. The basis for the painting served as canvas and oil. Its size is amazing, the height of the canvas is about 3.9 meters, width – 2.9 meters. Surprisingly, not only the author of the picture is known, but also the names of those depicted on it.

The central place on the canvas is occupied by a young couple strolling by the handle in the company of a cheerful white dog. The real people became the heroes of the picture – William Hallett and Elizabeth Stephen, the future husband and wife. By the time of writing the canvas, young people were barely 21 years old, they are still very young, inexperienced and therefore innocent. The canvas was created before the wedding and apparently was a wedding gift.

Combining the talent of the portrait painter with the mastery of landscape painting in the picture, Thomas Gainsborough portrayed young lovers against the background of the usual forest landscape. The young man and girl are richly dressed, their costumes are completely unsuitable for a long walk, but they perfectly underline the social status and position in society.

The light girl dress is richly decorated with ruffles. The thin waist underlines the black belt. The girl’s hair is loose, according to the customs of that time, her head is covered with a wide-brimmed hat with a few ostrich feathers. The young man is dressed in a black coat, the floor of which he holds with his left hand. The right arm is bent in the elbow, so that the lady walking next to her can comfortably lean on her. A young man wears a gray wig.

The glances of the walking couple are fixed somewhere in the side. With all their appearance, they are trying to show that what is happening is an ordinary walk, an everyday action, on which one should not focus attention. The white dog running alongside the girl is trying to interest her owners, but he fails. The characters look at the picture is clouded, they enjoy silence and each other.

Described the desire to emphasize the daily routine is typical not only for paintings Gainsborough, but also for paintings by other artists of that period. In the XVIII century, this genre of portrait painting received the name – “conversation piece”. The National Gallery of London stores a lot of paintings, written in this genre. One of these canvases is the “Morning Walk”.