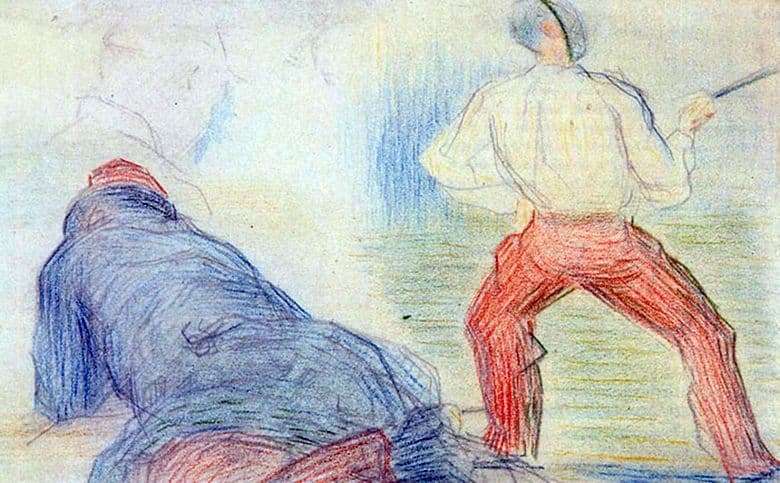 Every artist is a lifelong student. All the time you have to learn how to portray new angles, unusual objects. But the most difficult is always given the image of people. This work of the French artist Georges-Pierre Seurat is a clear confirmation of this.

This work has been kept for many years in a private collection, but it’s impossible to call it a picture that people always admire. This is just a sketch of a very young, novice artist. The sketch was created in 1880, when George was only 21 years old. The artist will create his first famous work only in three years, but for now he is learning to depict people.

On the sketch we see two figures. These are two men. The hardest thing is always to depict a figure in action or in an unusual pose. It is this skill that the artist is trying to develop in himself by making such sketches.

In the right part of the work we see a man in full growth. He is engaged in

fencing. We do not see his face – he has a special protective mask on him, besides, the man has turned his back to us. He is wearing a white wide shirt and the same wide red pants. Apparently, this is special clothing for training. The artist draws some folds on the clothes. The man’s right arm is bent at the elbow and stretched forward – he is practicing striking. The position of the fighter is very confident and stable: the legs are wide apart, the left hand rested against the side of the body. The surroundings are slightly drawn around the man: the vertical blue lines are the walls of the building, the green horizontal strokes are the floor.

The second male figure has nothing to do with the first. This is a man wearing a long blue coat, red pants and a hat of the same color. He lies and it seems as if he is trying to crawl. We also do not see the face of a person – he is crawling in a different direction from the audience.

Above the recumbent male figure there is another image. With a thin, almost invisible line, the artist drew the head of a man.