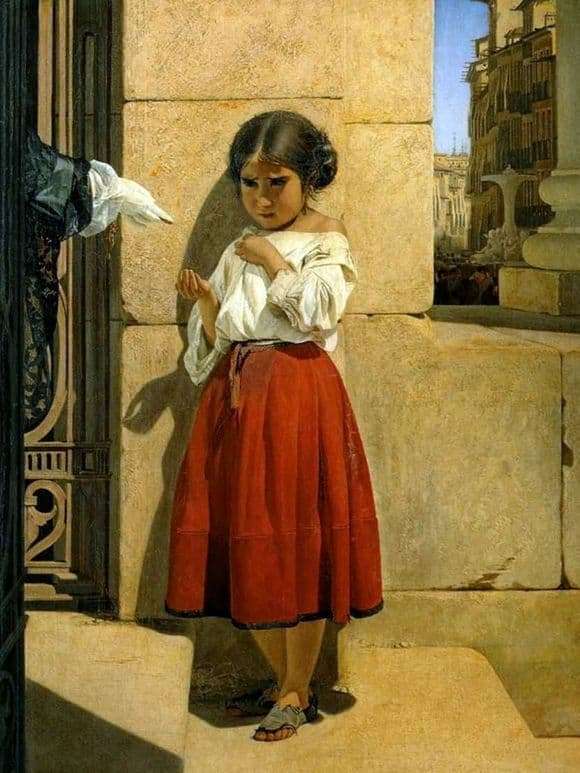 Evgraf Semenovich Sorokin in his picture depicted a girl of about ten. He put soft warm tones in his painting. Behind you can see the architecture of a rich Spanish area, made of white stone. It can be seen that quite rich and respectable people live in this area. This is a neighborhood of wealthy citizens of Spain, the artist depicted it in calm bright colors, thus emphasizing the tranquility of the lives of citizens living here. Luxury, emphasized by white-stone buildings, says that they do not need anything. In the foreground, another world opens. A poor girl is presented, dressed in a white neat blouse and red skirt.

This girl is pretty well-groomed. She is dressed in old but clean clothes. She has no dirty face, hands. The clothes are too big for her, it is clear that someone gave them to her. The skirt is also great for her she’s old but clean. Tightly tied belt supports skirt at the waist, that would not fly off. She wears what others give her.

If you pay attention to the legs, you can see that they are completely worn out shoes, from which stick out the fingers. It is not clear how she generally manages to wear them, it is very inconvenient to walk in them, especially since in order to collect alms it is required to travel a great distance. If you look at the girl’s eyes, you can see genuine pain and torment in these big brown eyes. She courageously carries all the burden that fell on her thin shoulders. She has an adult look, understanding the importance of her work, she is well aware that if she does not bring money, then she will have nothing to eat today. Her eyes keep a lot of pain. From the door a graceful hand draws alms to her. Thin white gloves of a wealthy person are worn on the arm.

The girl gives the benefactress a gloomy thankful glance. It is a pity for this child, she still has to go around a lot of houses ahead to find at least some kind of food.