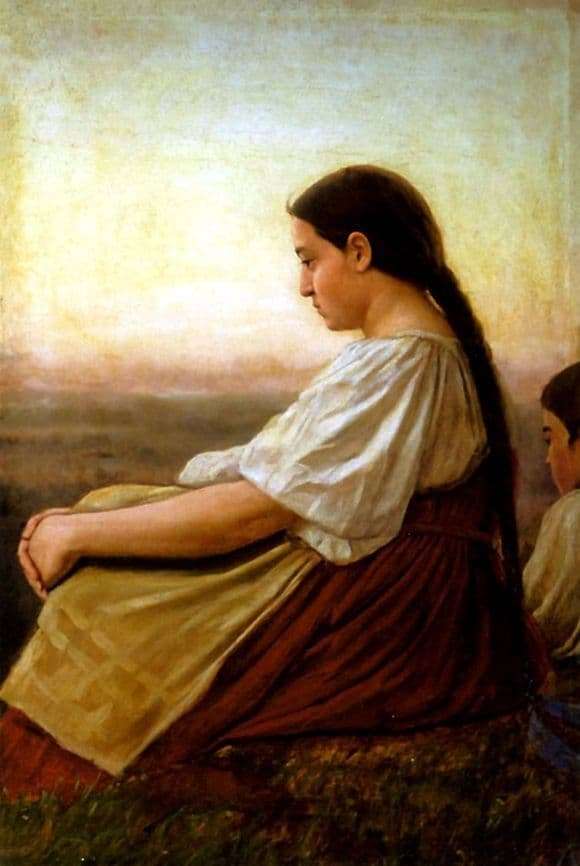 Perov – one of the artists of the Wanderers, who were something akin to the Decembrists, only if the Decembrists wanted to change the world with a kind word and a gun, before the Wanderers believed (and this may have been naive) that they can reach the ruling layers of the power of art.

More often than not, they wrote the common people, their burdens and joys. Someone inspired familiar peasant faces and showed their simple dignity, someone showed scenes that narrated about domestic nobility, someone wrote refutations of official propaganda.

Perov, on the other hand, was ridiculed, as a rule, by the stupid and harmful customs of the landlords who were snickering, who did not bring any benefit to the priests. So, among his paintings, there is a “Religious Procession” and “Tea Drinking in Mytishchi”, deriding the sins of the clergy, “The funeral of the deceased”, showing the loneliness of the peasants, who do not care.

“Girl” is in its own way out of this series. There is no mockery in her, only the desire to calmly and impartially convey beauty, which, like any virtue, can be inherent in both a peasant and a noble lady. In the picture, on a hill in the field, a girl is sitting. She faces the viewer with a half-side, her face can be seen only in profile. She is quite young. The nose is slightly turned up, the cheek is plump, the hands embrace the knees. The long braid descends below the back. The girl looks into the distance, without a smile and without close attention, just resting from a long day of work.

Next to her, a child – hardly a son, too big, rather a brother – also looks towards the sunset. The field around them creates a feeling of peace and unity with the earth. It seems you can feel the smell of mown grass and warm soil from him, hear the birds sing. the soft light of the sun floods the faces of the children, and they seem in their own way holy, part of the earth, born of sunset and grass, and not the dirty, stuffy world of gray cities.