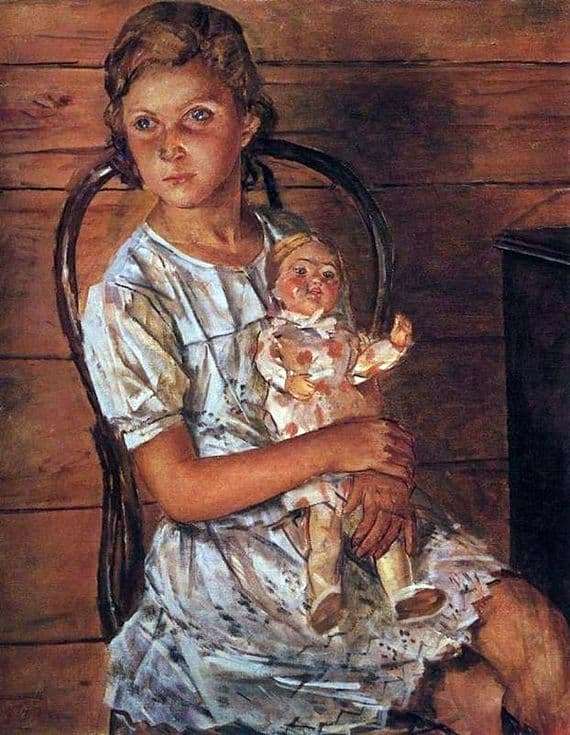 Petrov Vodkin – Russian and Soviet artist, writer, teacher. In his works one can often see the theme of motherhood, which is revealed in two keys – either in the context of holiness, the heights of duty of a mother who, fulfilling his mission, becomes equal to the holy, or in the context of naturalness and simplicity, part of life and holy ordinariness.

Also in his paintings one can often see children – grasped with a brush vividly, as if in the middle of a lasting moment, they seem ready to break loose and run away from the canvas in the next moment, leaving only the chair or chair in which they had been sitting before.

“Girl with a doll” – one of these pictures. It depicts Tatyana Piletskaya, a famous actress of Soviet cinema, in the years of childhood, when no one had yet thought that such a future awaited her. Her parents were friends with Petrov-Vodkin – their cottages were

Once the children of summer residents staged an improvised concert – they read poems, sang songs, danced – and Petrov-Vodkin, impressed by the girl’s natural grace, invited her to pose for a portrait. She was then seven years old.

They are located on the veranda. It was difficult for Tate to sit, and the artist let her sometimes spin, play with the doll – the father gave the girl a doll. When it was necessary to observe complete immobility, Tata looked at the stained-glass window on the veranda, peering at various glasses.

The picture left that summer in warm colors, in the red light on the veranda boards. The girl is sitting on a chair, wary, bored, looking to the side – would rather be released! – hugs the doll, which, like many dolls, is foolishly smiling from under the hand of the mistress.

On Tate is a white lace dress and she looks from the picture as if she were alive. Now nod and, comfortably arranging the doll, run away from the veranda, laughing fuzzily.