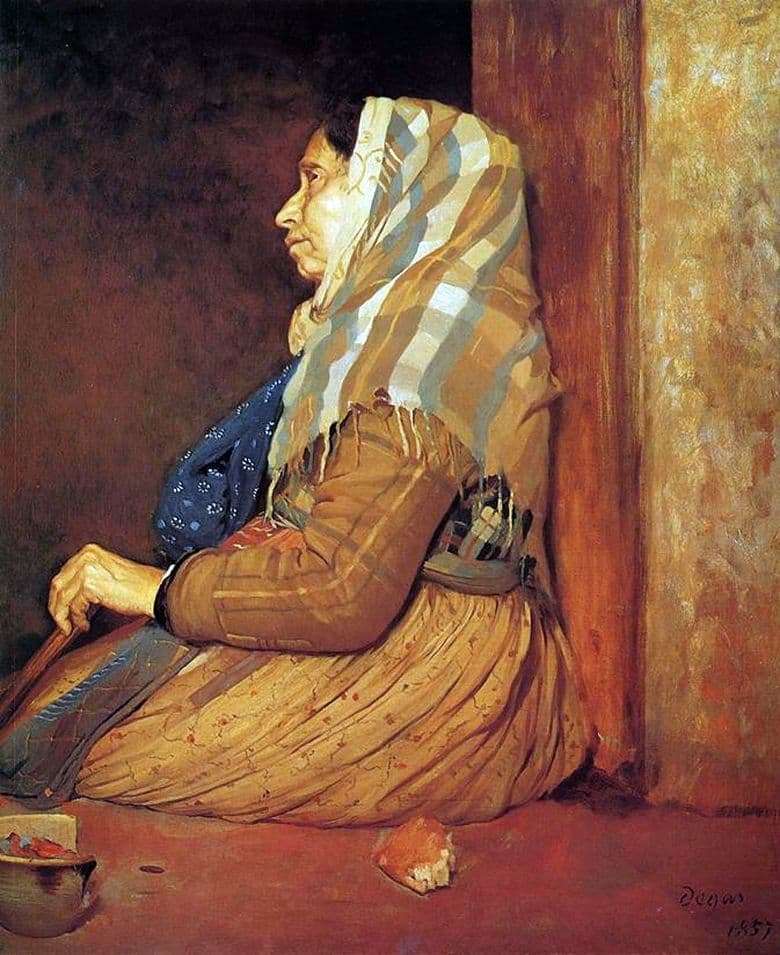 This work was done in a realistic genre and meets the basic canons characteristic of this area. But Edgar Degas is interested in experiments with the subject of the image. It is not by chance that for his work he chooses not an aristocratic lady in rich toilets, but a simple woman who does not have blue blood. Modern artist society was shocked by the plot chosen by him. But this does not detract from the highest skill of Degas and the ability to subtly feel the spiritual state of a person.

The picture shows a tired old woman. She is located on the threshold of her house. Leaning on the courtyard, she looks thoughtfully into the distance, perhaps watching something closely. The artist very carefully draws the facial features of the heroine of the picture and the smallest details of her clothes. Not a wrinkle or shadow will escape the viewer’s eyes. At the same time, the background of the picture looks conditional enough so that nothing distracts us from the contemplation of the image of the heroine. The main task of the artist is to create a generalized and not idealized portrait of a Roman beggar woman.

Color painting pictures, in fact, rests on only four colors and their shades. But it is this technique that gives the work a special graphic and some image rigidity.

The picture says that the life of a woman is full of hardships. This can be judged not only by worn clothing, but also by certain details of the exposure. As if by chance, next to a woman, there is a broken off piece of bread and an earthen pot with a broken handle, in which the uneaten food is seen.

The portrait has almost photographic realism. Edgar Degas so accurately recreates the image of a woman that creates the feeling of our presence and participation in the captured events.