Home ⇒ 📌Repin Ilya ⇒ Description of the painting by Ilya Repin “Arrival of the kings John and Peter Alekseevich to the Semenovsky fun yard, accompanied by a retinue” 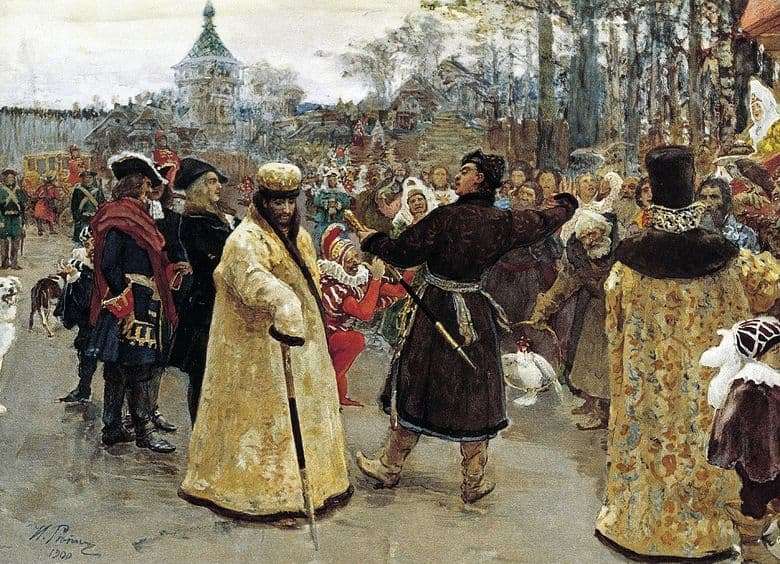 This picture was painted by the great Russian artist in 1900, but the work tells about the years when kings Ivan and Peter Alekseevich Romanovs lived.

The painting “The Arrival of the Tsars John and Peter Alekseevich to the Semenovsky Fun Yard accompanied by a retinue” depicts a real event. In the 17th century, Alexei Mikhailovich was very fond of falconry and tried his best to develop this area in Russia. In Semenovskaya settlement, he substantiated a large falcon yard, where they raised various birds of prey. When Peter I and Ivan came to see this place, they were shocked by how many people are caring for these birds. More than three hundred people appeared before the kings. Peter didn’t like such extravagance, and he decided to make a Poteshny regiment out of these bird watchers. Thus, the king decided that these men would be able to benefit the motherland.

In the center of the canvas we see the figures

of two kings. They are surrounded by several boyars, accompanying royal persons in many travels. All high-ranking personalities are dressed very well: they are decorated with richly decorated clothes, hats embroidered with gold thread and fur. Peter is depicted in a very strong position. John, on the other hand, bowed his head and seemed to obey Peter’s orders. So, the artist wanted to show what the relationship was between the kings. Peter was always more powerful than John.

The usual Russian people crowded around kings and boyars. They are more like a gray, faceless mass on the background of the royal persons. The clothes of the peasants are brown and old. Many men are overgrown with a thick beard.

In the background we see the winter forest. Tall trees surround the whole settlement. Not far from the forest is a small palace. The building is quite interesting shape with a sharp roof, which is painted in different colors. Not far from the palace you can see the royal carriage. Covered with gilding, it stands out brightly against the background of pale peasant clothing.