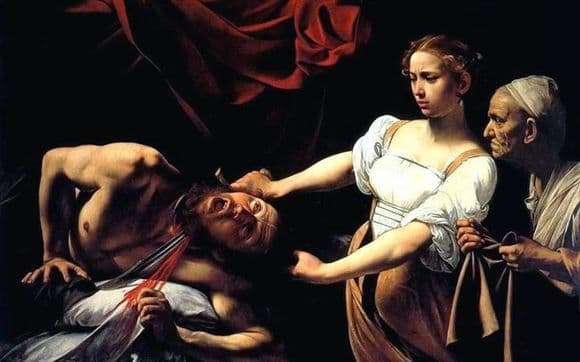 Holofernes was the leader of the army of the famous conqueror Nebuchadnezzar. One of the cities of Vetiluia was besieged by enemies. In this doomed city, and lived Judith. She differed incredible piety and chastity.

It was impossible to escape. Then Judith chose the best outfit and boldly went straight to the enemies. She fully won the trust of Holofernes. Once he fell fast asleep, because before that he had drunk a lot. Judith calmly cut off his head. The army was left without a boss. An incredible panic began, and everyone simply ran away. Judith began to live as before. She never married.

Judith killed Holofernes precisely because he was a pagan. She did it in the name of God. This act became really relevant when the Catholic Church began to suppress all kinds of heresy. Judith was an example for religion fanatics.

Caravaggio portrayed Judith very masterfully. On her face it is impossible to read the triumph of victory or passion. One can only see that it is decisive and at the same time disgusted. The heroine is dressed in the best outfit that was available for women from the common people.

Usually the heroine was depicted after she committed the murder. She kept her head cut off. The artist captured the moment when this terrible event occurs. The head still rests on the body. She is not completely chopped off. Holofern’s eyes absolutely rolled out of orbit, and her mouth stopped in a terrible scream. The artist enchants the process

The picture naturally conveys the details of the decapitation. The smallest details of the physiological nature are shocking. The same contribute to the bright colors used by the artist in order to give the picture maximum vitality.

If before Caravaggio painters paid attention to feats, the artist first decided to focus on the murder. The viewer sees the terrible and incredibly harsh side of this event.