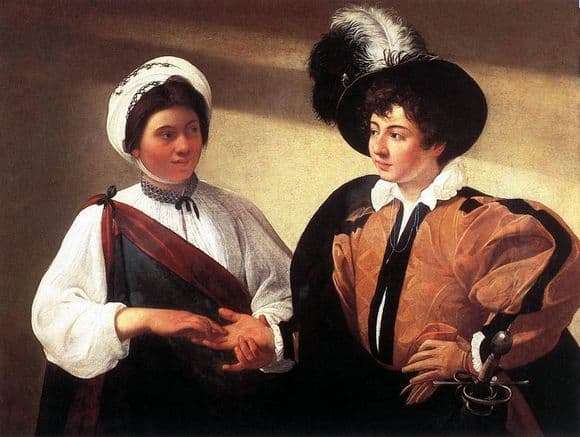 This picture belongs to the domestic genre and was first mentioned by the artist’s biographers. The canvas depicts a young girl who is a gypsy. On her face you can see a slight smile, in which there is a desire to fool a young man, predicting his fate and telling the future. The hero of the picture – comes from a noble family, who enthusiastically looks at the pretty girl holding his hand. He seems naive and interested, expecting a prediction from a girl with interest. But the young man does not notice that she is going to deceive him.

An amazing detail that is very difficult to notice is the moment of theft. Gypsy, distracting the guy with his eyes, removes a gold ring from his finger, but he does not see this, not expecting such a trick. The hero of the work is dressed in a rich dress, telling about his narcissism. This helps the girl to reveal the secret of his character and to distract as much as possible from all that is happening. According to critics, Caravaggio, writing this picture, wanted to show that the plots and events taken from real life can be interesting and carry in themselves depth and meaning.

Before creating the picture, the artist invited a young gypsy who owns the ability to predict the future. He asked her to demonstrate exactly how she reads her hand and talks about what should happen to a person. The master himself portrayed the one to whom she should guess. Thus, he wanted to feel the moment and feel the best of what was happening. The main goal of Caravaggio was to achieve the greatest realism, which is read in the facial expressions, the behavior of the characters, their clothes and movements. The artist used a sharp opposition of light and shadow, which made his canvases voluminous and alive. His work had a great influence on artists such as Rubens, Velasquez, Rembrandt and others.