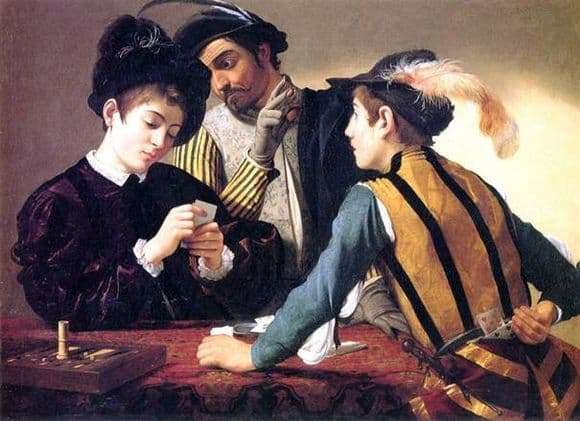 Master of realistic paintings of the Baroque era, Caravaggio tells in his masterpieces about life around without a hint of rebuke. On one of the canvases of 1596, called the “Rounders,” an Italian painter demonstrates a scene of petty card fraud. Such actions were the usual everydayness for the society of that time, an obvious fun.

The composition of the image is built according to the classical canons. Three male figures are located in an imaginary triangle. This technique facilitates perception and makes the picture very balanced.

Right at the table we see a young boy, he calmly looks at his cards. The face of a handsome young man is bright and somewhat naive. The other two participants in the old poker are accomplices.

A man of mature age is behind a boy who stared at the deck. With a tenacious look, he reads the suits and shows secret signs on the fingers of a younger player. On his gloves, cut pieces of fabric are visible – for the convenience of probing marked cards.

The second cheater is preparing to get cooked cards from the cut of clothes. He deliberately misleads his poker mate with a silly, distracted gaze. I just want to know how the party has developed. Did you manage to cheat? Not upset if the gullible little boy?

The artist has paid a lot of attention to the elaboration of costumes. Deceivers are dressed in colorful, striped clothes, which makes them similar to the jesters. On their hats – lush bird feathers.

The background of the picture is neutral, beige. On it the big site shined by the sun is distinctly noticeable. Generally, in the canvas “Schuler” a lot of light and few darkened areas. Refusing to dramatize, Caravaggio writes a hymn to a merry celebration and game. But we, the audience, are still saddened by the deception: he calls for being more careful in life.