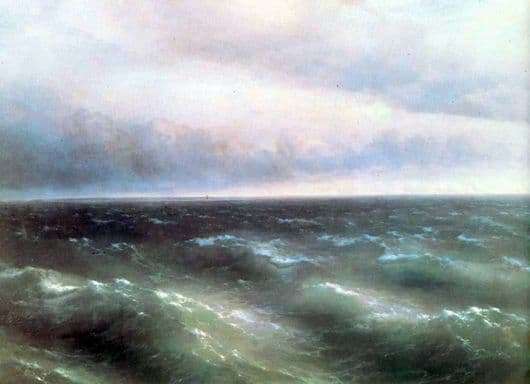 The painting of Ivan Konstantinovich Aivazovsky “Black Sea” has an amazing property, like all the masterpieces of the artist. Looking at the landscape depicted before our eyes, there is a feeling of presence in the thick of the vast expanses of the Black Sea.

The composition is harmoniously divided into two equal parts, where the upper half of the canvas is the sky and the lower half is directly by the sea. These two halves, separated by a horizon line, resemble certain reflections of opposites. In the sky, we see clouds, and closer to the right side of the canvas, they darken, turning into clouds. The sea appears before us in its powerful elemental manifestation, and the white clouds of heaven are reflected on the massive crests of moving water, alternating with foamed sea crests.

Looking deep into the picture, we see right below the clouds, closer to the left edge of the canvas, a shaky, barely perceptible in the distance, dry land. Next to the distant coastal line, we barely distinguish a vague figure that reminds us of a lonely sailboat, tending to our home.

The sea is made in bluish-green tones, reminiscent of the true color of sea wave. In the sky there is a whole palette of various shades, including pale milky white, dull pink, blue, turquoise, purple and even gray-bluish tone.

Clouds move, like sea ripples, from right to left, driving away bad weather, revealing pure space in the sky, and transforming the water abyss into a fabulous, sometimes phosphorescent with white celestial light – the sea. Clouds and clouds form a wedge when viewed in the horizontal plane. The lower part of the wedge resembles a tornado expanding to the left.

The upper part of the wedge more gently expands to the center of the picture. Thus, the gap between the thunderclouds and cumulus clouds forms a bright space above the ship, far from us and close to the shores of its home.