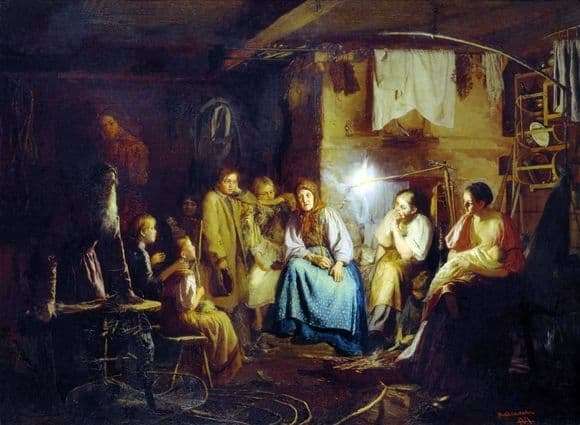 The picture “Grandma’s Tales” is striking in its authenticity and veracity of the image.

The artist, himself a native of the village, as no one else knew and understood peasant life. Hard work, meager joys, infrequent rest, it was all part of his own destiny.

Each carried his own possible contribution – the men coped with hard, physical work, the women dragged the house on themselves, and in the work they did not lag behind the men. There were enough worries for children – from an early age as nannies, as assistants, how much joy did it get, and carefree games? Yes, and when to play, if the parents bent back to the dark.

Old men and old women, too, how could they have facilitated the lives of the rest of the household – cooking food, for which water must be dragged, and firewood, and the strength is not the same…

So it was a joy that grandmother’s tales were dark in the evenings, with a lash, when the difficult day was over, when peace and tranquility set in.

In the center of the picture, the old teller’s face is highlighted with a bright spot. Her gaze is thoughtful, and she probably sees what she is inventing.

Her hands were laid tiredly on an apron, she also had a difficult day, but now a fairy tale is pouring, and the children believe in this non-fiction. She herself knows how rarely the birds of happiness arrive, that’s why the gaze is extinct, and the whole face expresses resignation and indifference, but the unblinking eyes of children do not allow silence.

It seems that not only children are taken to the magical worlds by the story of an old woman. Here is a young woman, propping her cheek, with interest listens to the fairy tale. The mother who feeds the child became thoughtful. Perhaps, she compares her life and that fairytale, which is never destined to come true?

Even the young man, stopping at the door, lingered for a moment. He does not believe in fairy tales, but… What if something is there? And only the old man is busy with his business. He lived a lot, he knows that neither he nor his family expects anything magical.