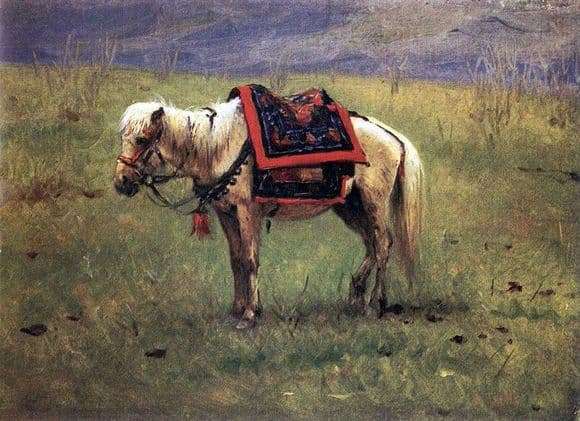 Vasily Vereshchagin once roared not only to the whole of Russia, but also to the west. His paintings admired in America and England. In Sweden and Poland.

In his works depicting seemingly ordinary scenes from life, something more was hidden. However, having such popularity, the artist did not attend any meetings, did not independently exhibit his works at exhibitions, and even more so, did not seek recognition. He modestly worked in his workshop, and the fruits of his work became the object of curiosity of others.

Vereshchagin was a military class that many were amazed. A real combat officer who has gone through several wars, but at the same time contrived to write such masterpieces. Most of his work is related to the Himalayas. And one of them is the “Himalayan Pony.”

If we start examining the canvas, starting with the background, we can understand that a dwarf horse is standing in a clearing in the middle of the mountains. The grass has a slightly yellowish tint, so we can assume the time of year when the painting was drawn – autumn.

Pony is not intended for long movements. Their use, most often, is characterized by circus, or children from wealthy families. The animal, intended for short rides and fun, stands alone, with his head down in the midst of the Himalayan mountains. One leg is slightly off the ground, although the rest of the body shows that the animal is not going to move. What is it doing here?

I would like to hope that the pony escaped, and now to be free, far from the noise and naughty kids. Or maybe this is the place where the traveling circus opened, and the animal is just walking. It has a saddle on which a colorful cape is spread. As if the artist did not give brightness to it, the picture still turned out dark. After looking at the pony’s gloomy face, you no longer pay attention to the bright elements of the picture.