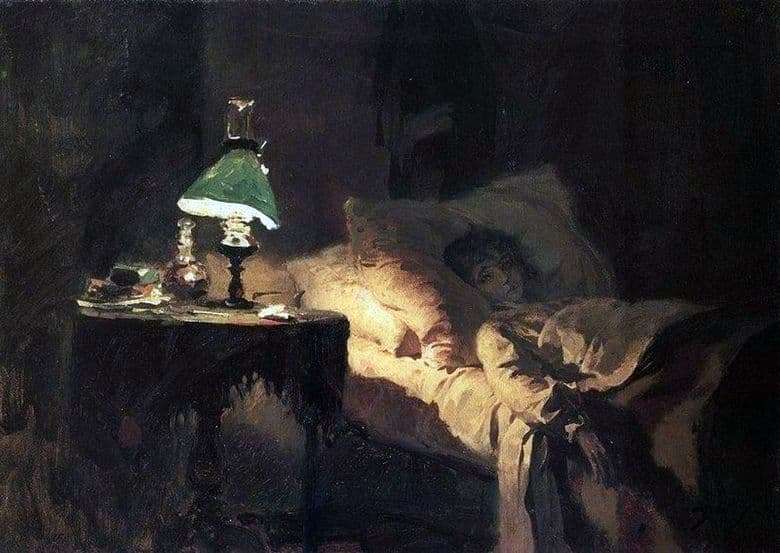 Vasily Dmitrievich Polenov came from a noble large family. His mother was a children’s writer and drew well – it was she who gave her son the first painting lessons. The most vivid impressions of the artist’s childhood are connected with trips to the north and to his grandmother’s estate. Later, some early memories he reflected in his paintings. It was the grandmother, Vera Voeikova, who shaped the taste of the boy. She told children fairy tales, recited poems by heart, versed in Russian mythology, folk tales and traditions. Talented Polenov turned out to be multifaceted – as a student of the Academy, he attended not only drawing lessons, but also singing and music lessons, lectures on anatomy, history, geometry, and studied architecture and construction. Becoming older, the artist traveled a lot. He was especially attracted to places somehow connected with the history of Christianity.

The picture “Sick” is based on a real story. While in Rome, Vasily Dmitrievich met a student from Russia, Elizaveta Boguslavskaya. Later, Lisa caught a cold and got sick. The innocent disease quickly turned into tuberculosis, and the girl soon died. Elizabeth posed for the artist while still alive, lying in bed. Her death deeply shook Polenov. Just after this, another person close to the artist dies – Marusya Obolenskaya, with whom he was in love. Under the influence of two deaths, the artist painted a dark, almost black, incredibly tragic canvas, in the process of creating which he lost his twin sister and newborn son. Looking at him, the viewer physically feels the feelings of the author – the thickening darkness of loss, the terrible impotence before death, the inevitability of what is happening.

The tragic approach of the sad outcome is felt in every smear of oil. Drenched darkness, enveloping a thin figure of a girl, as if in smoke, a haggled and frightened face of a patient, huge shiny eyes. If you look closely, in the depths of the picture in the assembly of shadows you can see the sorrowfully bowed figure of a woman – perhaps this is the girl’s mother, and perhaps Death itself.

The girl looks at a lit lamp, as if not wanting the light of life to leave her. Covered with a green shade, the lamp casts warm shadows on the bed and on the table. Still life, illuminated by yellow light, gradually attracts the attention of the viewer. Tattered reading books, which the heroine probably turned over during her illness; muddy carafe and a glass of water; blood-purple, as if torn tablecloth. The work was done in broad, uneven strokes; it may seem that it is incomplete. In fact, the canvas was written long thirteen years – Polenov returned to him in moments of deep grief, spilling the pain of his losses onto the canvas. Truly, this is the most gloomy and sad work in the artist.