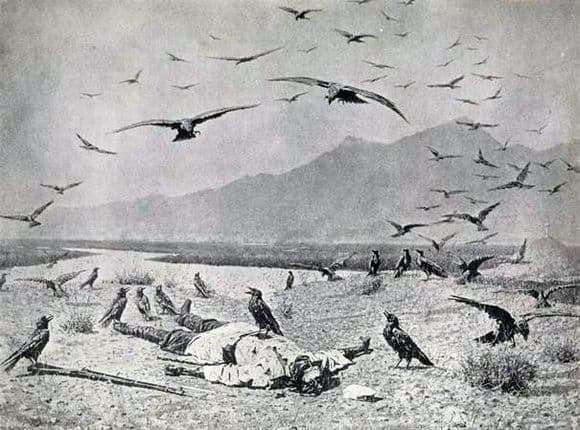 Vasily Vasilyevich Vereshchagin – a career officer, a graduate of the Marine Corps, preferred the artist’s path to military service. In his work, again, the main theme was military. Vereshchagin can safely be called the predecessor of today’s photojournalists. Knowing the war well, he strove without embellishment and certainly transferred military action to the canvas not only as a terrible and large-scale spectacle, but as an inevitable and terrible part of human history.

Art Vereshchagin called striking. He was the first to dare to go beyond the framework adopted for works on the cruelties of war. The artist tried to capture the most acute moment, making the feelings of the audience stir. Of course, there were also opponents who perceived the master’s work as a personal reproach to his side about the merciless and cold-blooded waste of other people’s lives. Some commanders, even among foreign troops, forbade ordinary soldiers to attend Vereshchagin’s exhibitions.

After traveling through Central Asia, Vereshchagin will create a series of paintings called “Turkistan”. The works shocked the audience, objectively talking about foreign campaigns for the Russian troops. It is important to note that all the canvases were recreated according to numerous etudes written from life and personal impressions of the master himself. “Forgotten” – a picture showing the true face of the war. The soldier, who died far from his homeland for the interests alien to his thoughts and heart, was left to be torn apart by birds. The canvas caused a flurry of indignation among the military of the Turkestan army.

The image is designed in black and white, because death reigns here. A flock of scavengers, flooded the sky, rushes to the lifeless body of a nameless warrior. Until the end of his military duty, he was just a useless sacrifice of useless heroism.

Vasily Vasilyevich did not embellish or praise the battle, his goal was to demonstrate the ugly side of the war. He himself hated battles, although the artist and the warrior in him were one. Vereshchagin – the only Russian painter – was awarded the Order of St. George IV degree. Unfortunately, adored and praised by the people, Vereshchagin was subjected to endless persecution and harassment by the elite. As a result, he was brought to a nervous breakdown and destroyed several canvases, among which was the work mentioned.