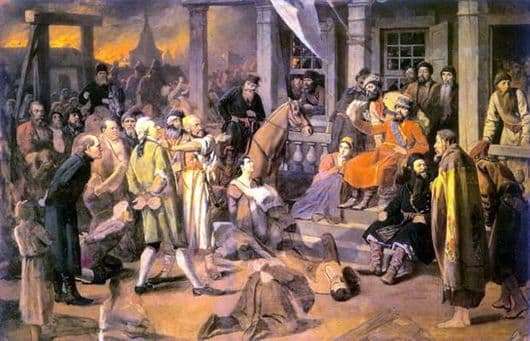 Certainly the great painter wrote this canvas under the impression of Pushkin’s book The Captain’s Daughter. In this novel, there is a court scene, and this painting can be said to be a good illustration of that scene.

Probably you should not repeat the history of this Cossack revolt and recall some important milestones in the life of Yemelyan Pugachev. The fact that it was an impostor and a daring man was not immediately clear.

At first, Pugachev had victories and, feeling lucky, he decided to go to Moscow. But at the same time, in those cities which he seized, he carried out his court, sometimes ridiculous and strange and often quick.

The first who suffered from this court were the commandants of fortresses and cities, officers. There were accusations false and absurd, but he personally was not sorry for these people. Here and on the canvas, see how much passion, how much pain and how much emotion.

Emelyan Pugachev himself sits in a chair on the porch and administers the court from above. Someone lost consciousness, someone on the knees asks for mercy, and someone stands proudly and does not even think to cringe in front of the rebel. Nearby is visible the gallows.

Fate then played a cruel joke on Pugachev. He was nevertheless arrested and, like a beast, was taken to St. Petersburg, to the court. Why like a beast? He was carried in a cage so that everyone could see how it was to rebel against the empress and slander her family. And then he was cruelly executed, almost the same as he, without any discounts, executed many officials.

On the canvas, he is still in power and feels like the master of destinies, but how illusory is this feeling and how quickly does power end. He understood that later.