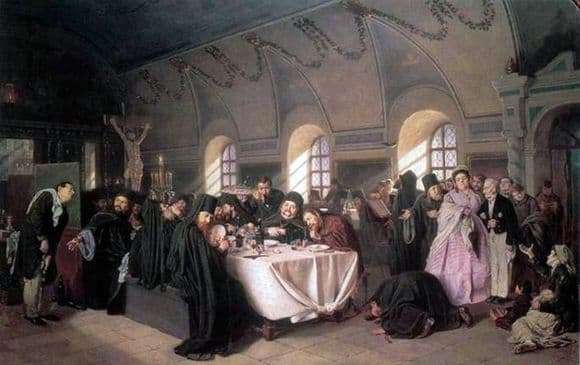 One of the outstanding artists of the nineteenth century, Vasily Grigorievich Perov, in his paintings almost always revealed the imperfections of modern society. One of such works is the “Trapeza” canvas. Here is a scene of dinner in the monastery walls. In front of the ministers of the church laid a luxurious table filled with a wide variety of dishes. The process is depicted in such a way that it causes internal rejection of the clergy, rejection of their ugly behavior.

All the celebrations, drunkenness, gluttony of the clergy take place right in front of the crucified Christ. On the right side of the canvas, you can see a priest, who curses in front of a rich lady. And here a woman with small children in her arms asks for help. But no one pays her the slightest attention. A holiday with earthly comforts arranged on the temple grounds gives out what the church looked like at that time.

Painting on the canvas is too straightforward, in each stroke smells poisonous irony. Despite the fact that the fun is depicted, the artist writes in muted gray tones. People in church clothes were already blushing by drinking wine and, apparently, they had long forgotten where they were. This causes some disgust for them. And such behavior is already perceived not as a disadvantage of the church, but as a kind, not quite pleasant, feature of this time. Perhaps for this reason most of the paintings of Perov were not allowed to the exhibitions. After all, such a clear and sharp condemnation of vices will not always be perceived by society.