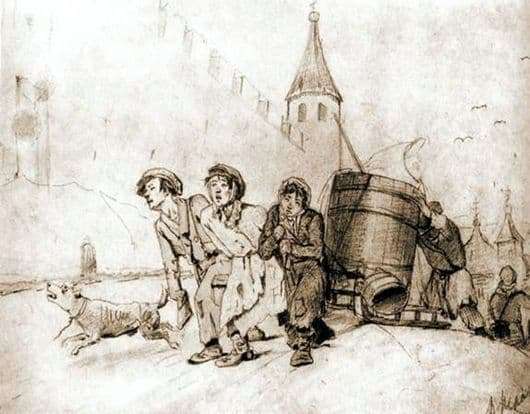 This is probably the most amazing and amazing picture in its simplicity. Perov spent a long time searching for nature for these three characters, who with great effort are pulling a large barrel of water on their children’s shoulders. Perov quickly decided on the side characters, but he could not find the central guy. And then few agreed to go to the studio to pose.

The artist drew a lot of etude sketches, looking for the face of the child, but he could not catch the face of suffering. A composition has already been found, a troika has already been compiled – but there was no center face. Then one day he found such a face among the beggarly children.

I found the parents of this guy – simple peasants and began to persuade them to allow drawing the guy on the canvas. Mother did not agree for a long time. The people then were dark and believed in all sorts of superstitions. One of the superstitions: once

drawn, a person will soon die. This is what scared the poor woman. And yet she agreed. 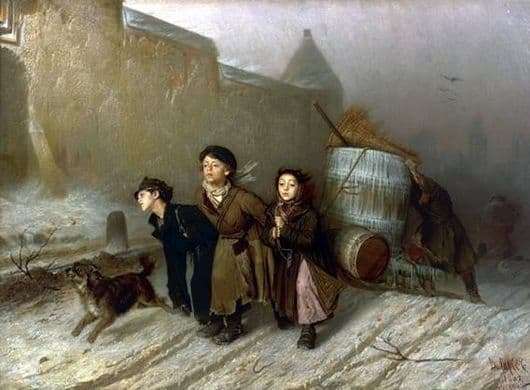 The canvas was ready. A triumphant future awaited him. At the exhibition, everyone was shocked by the tragedy of the canvas, by its sad hopelessness. But once Tretyakov himself noticed that for several days in a row the same woman came up to the canvas and stood crying for a long time. And then I found out that this is the mother of the very “center”. Soon he told about her visits to the artist and he met her at the canvas. As it turned out, the boy died of typhus and therefore she comes to the canvas, because on her he is like a living and still healthy. Thus, that superstition was indirectly confirmed.

“Three” and now is amazing. But look how differently the artist wanted to create his canvas. On the sketch there are completely different faces and even the composition is completely different. The turn of the heads, the outgoing passer-by in the background, the walls of a huge house… Everything was sketched on the sketch differently, and the finished canvas itself was replenished with details and slightly changed the proportions of the feed. But this creation did not become worse.