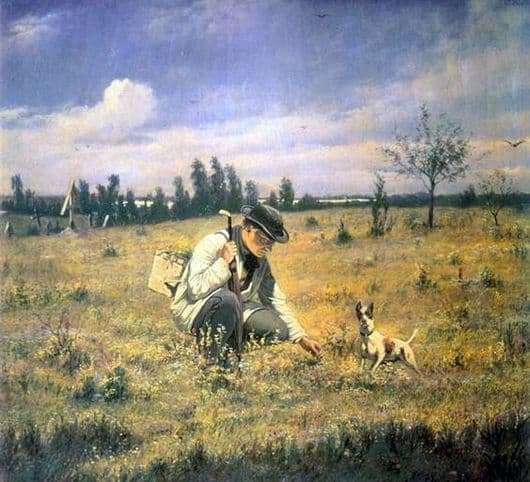 Perov – glorified himself with his portrait mastery, expresses his essence in ideological realism. It was he who inspired to carry this style to the masses through the canvases.

For a long time, Perov has been using social themes that are sharp enough even for a painter. And now, the period has come when he returns to nature again, treating the author’s reality incredibly sensitive and tender.

“Botanist” refers to the hunting series of paintings, more precisely, to its logical continuation. In the center of the plot is a young scientist whose box of herbs behind his shoulders determines his biological orientation.

A long walk is not a botanist, with him everywhere his faithful four-legged friend, who seems to have seen the artist and was alerted. But still, the dominant place in the plot is nature. It would seem that an ordinary field is written, but if you look closely, every flower, every blade of grass is registered. Everything is decorated with such genuine love that it is impossible not to fall in love with this creature.

The picture was made using a wide color palette, but almost no contrasts are visible, except for the contrast of moods: happy summer, pensive, focused nerd, carefree dog. But all this is harmoniously processed by smooth artistic transitions framed by living sunshine. They stop on the viewer’s eye.

Even a decade before the creation of “Botany”, Perov was awarded a gold medal for the painting “First Rule”. This picture was noted by many famous critics of the time. The counterbalance to the universal recognition in painting was the failed personal life of the artist.

Perov died early enough, at the age of forty-eight, from incurable tuberculosis at that time, but even after his death he did not go into oblivion, his connoisseurs of art still admire his paintings.