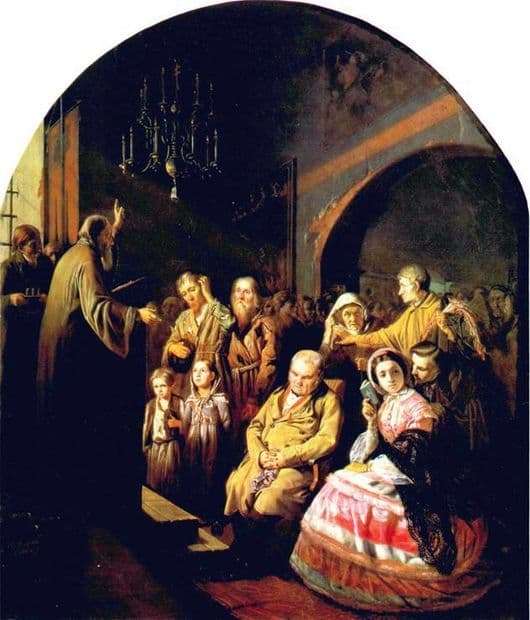 The canvas was released in 1861. The canvas was created that same year when serfdom was abolished. The painting was painted by the artist as a thesis. For it, Perov received a gold medal, but at the same time the opportunity to travel abroad at public expense.

On the canvas, the artist depicted a priest who reads a sermon and simultaneously points upward with one hand, and the second points to a well-fed landowner. Perov put into the picture the meaning of everyday relationships in society between ordinary peasants and rich people. Events develop in a rural church. The artist shows how different segments of the population behave in the same circumstances.

In the meantime, the landowner, without paying attention to what is happening around, calmly slumbers. Near it is depicted a young girl who is also not interested in the words of the preacher. She has a more exciting experience. The young lady is hiding behind a prayer book, thinking that this will help to hide her conversation with the gentleman behind her, who is saying something directly to her ear.

On the canvas on the left side is a group of peasants. Immediately noticeable that they do not care what the priest says.

With genuine indifference, the bearded man looks at the preacher, and the one next to him scratches the back of his head. His eloquent gesture hints at the meaninglessness of the speeches of the priest. Only children try to listen carefully, but the meaning of what they said is hardly understandable.

When creating a work of art, the artist was not going to put a hidden meaning into the picture. But the peasant reform influenced his decision. And he depicted on the canvas the images of peasants who are waiting for the manifesto to be read out in the February 19th. They are less noticeable due to the foreground figures. The main meaning of the picture is a thirst for justice and truth.