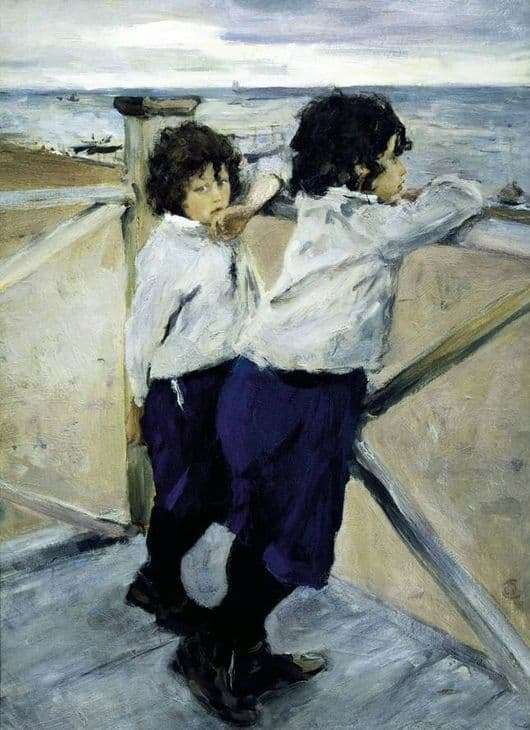 Serov V. A. “Children” was written in 1899 as a group portrait, but it turned out quite a diverse work. This picture shows 2 sons of V. A. Severe. This is 7-year-old Sasha and 5-year-old Yura. They are the main characters of the picture. These boys are standing on the terrace of the cottage.

The older boy’s gaze is fixed on the distance, at the sight of the Gulf of Finland and the evening sky unfolding in front of him. The younger brother looks at the viewer. This genre picture, but also a portrait of 2 boys. Both boys are equally dressed. In this case, both boys are quite similar, they have dark hair, they curl, and randomly fall on his forehead.

The picture can be traced and the difference in children’s characters. The older brother is closely watching the picture of the evening bay that has opened before him, the younger one is dreamily looking ahead thoughtfully. The characters of the children are subtle and skillfully depicted due to their gestures and postures. The objectivity of the transfer of this character is transmitted as when the child is left alone, and quietly observes what is happening around.

In addition to the main characters, children, the artist described in detail the gulf that opened to the viewer, small boats moored to the shore. Some swim on the water surface in the distance.

All images transmitted by the artist, successfully and harmoniously linked to each other. The watery surface, and the darkening sky, show that the artist wanted to show the evening sky, heavy clouds.

The picture in front of us is a portrait, a genre scene, and a landscape. Serov painted this picture not to order, but for himself. Both boys turned out in natural poses, they merge with the landscape. Before us appears a single plot. It is quite easy for the viewer to catch this mood that the artist wanted to convey, and in which he himself was when he painted this portrait.

The picture is in the State Russian Museum.