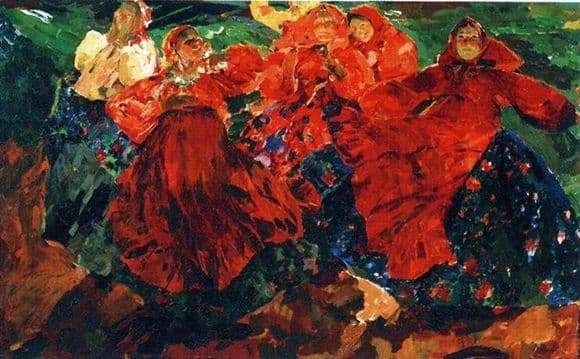 Malyavin creates an unusual picture. He depicts how simple women dance. It seems that the heroines of epics miraculously came to life in his picture. Different elements are involved in this strange round dance. Robes fluttering. They are deliberately dissolved in the rich brush strokes of the artist. It seems that it is flashes of fairy fire, or ice streams of water. At times they burn us with the breath of a mighty wind. Sometimes it suddenly seems that we see lush meadows.

The canvas is incredibly dynamic. The artist’s brush really moves very broadly. This is fully consistent with the energy-filled dance that Malyavin portrayed. The master created his masterpieces with complicated paints that had dried for a long time. That is why such a painting resembles an unbridled volcano. The artist creates a grand mosaic effect, surprising for its magnificence.

Paints float on each other, forms lose their clarity. This allows you to create an impression of power that erupts from somewhere inside. Creation becomes as expressive as possible. The artist works at the junction of two of the most powerful trends. His canvas at the same time impresses with an impressionistic reading of the plot and an expression in modern style.

Malyavin hoped that Russia would be reborn spiritually, but at the same time he seemed to feel the rampant of forces.

The artist was able to depict the powerful energy of the people, his soul. The sound of this creation truly reaches its apogee. The artist declares to contemporaries and all of us that his temper is wild and wild.

Many critics were convinced that this canvas was connected with the mood of the coming revolution. Malyavin always sought to protect his creations from ideology.

The riot of colors and the magnificent embodiment of the national spirit impressed not only the contemporaries of the artist. The power of the artist’s skill is truly extraordinary.