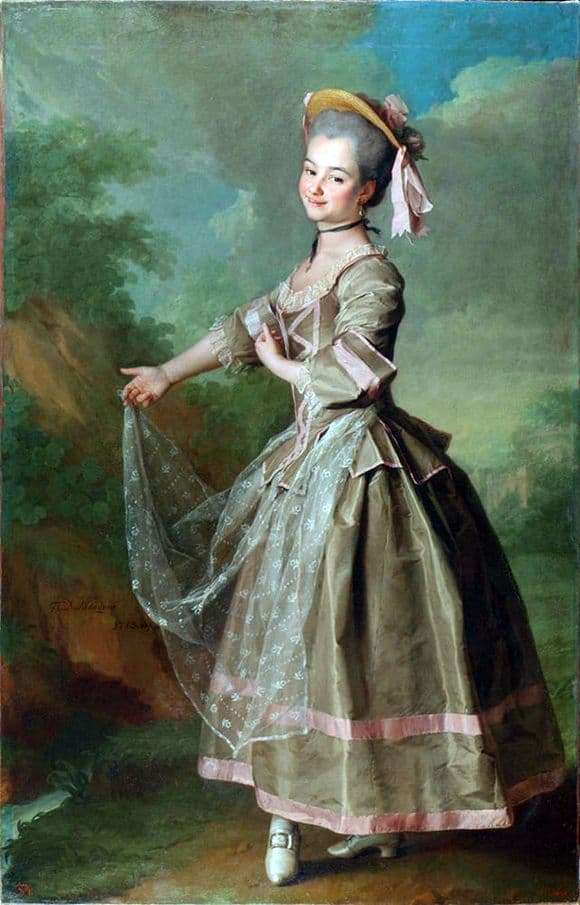 Nelidova – the maid of honor of the imperial court, a woman of an extraordinary mind, lightness of character and courage. Easily converging with people, she playfully made good contacts, found friends where no one seemed to be able to find them, and could even reassure Paul I when he fell into hysterics and began to run amok. It happened that she protected the Empress from the angry Emperor.

In the picture she is depicted rather young, even before her expulsion from Petersburg, even before unpleasant rumors about her and Pavel. She recently graduated from the Institute (Smolny Institute of Noble Maidens), her whole life is still ahead, and she is dressed in a theatrical dress in which the pupils happened to dance during performances. Usually portraits of those times seem solemn and strict, with all the regalia, and always with a stern look at the viewer.

Nelidova is depicted in the dance – it can be seen throughout her pose. The legs are crossed, the hands make a circular motion, as if delineating an imaginary circle, the body relative to the legs goes back, the head is slightly tilted to the left. All this creates a feeling of spiral movement, spiral twisting – it seems that in the next moment a young girl will spin around the picture, waltzing with herself.

She has a neat hat on her head, a hand holding a light transparent apron, and a sly, cheerful smile playing on her face. Like a naughty girl, Nelidova looks at the artist, and with him the viewer, with a sidelong glance, as if checking whether he is angry that she is dancing? Will he stop or laugh?

Her eyes are brown, her hair is ashy, her hair is high. In all respects, it should seem quite adult, but it does not seem.

Such she went through life – laughing, dancing, shaming and playing. Giving people a sense of joy and future happiness.