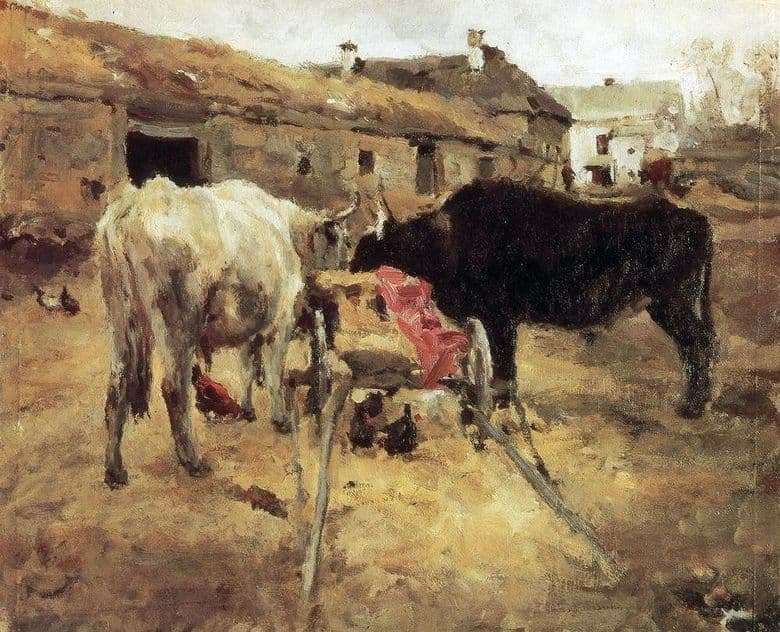 The painting belongs to the early period of the artist’s work, but the features of Serov that are characteristic of Serov are already noticeable: a strong mastery of the brush, rather coarse, clear strokes.

The plot chosen for the etude from rural life has a bright originality. With a delicate skill, a simple, at first glance, scene of feeding the oxen after the end of the working day is transmitted. The color contrast of black and white gives the picture depth, leads the viewer to think about the dual nature of the world.

It was as if a pair of animals were deliberately selected, converging on a hay-filled cart. A scarlet rag casually thrown over the straw adds color, as if to divide the picture in two. Another bright color spot is the chicken between the hoofs of a white ox. On the general neutral background, these details create a disturbing feeling, make the scene emotionally rich, lively, eye-catching.

Background work done carefully, but does not distract from the main characters of the picture. Stooped farm buildings, a white house in the distance, a gray overcast sky, the trampled earth of the barnyard under the feet of animals – all this together gives rise to a melancholic mood. A look against the will focuses in the center of the picture, where the oxen, almost touching their faces, are busy feeding.

Work done with a firm hand of a master looks voluminous, filled with life and meaning. It is wonderfully harmoniously built in its proportions, the viewer’s eye smoothly flows from one detail to another, perceiving the whole plot. The sketch from the village life in the performance of the painter turns into the eternal motive of the unity of the two opposites.