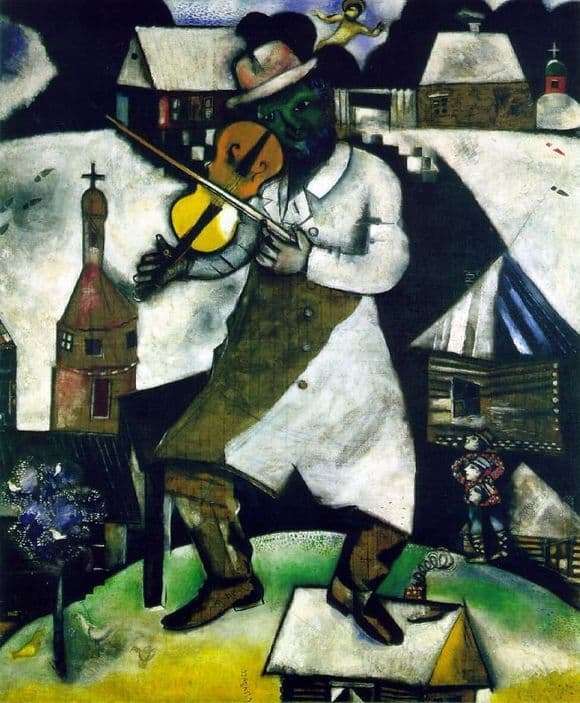 Chagall often has a violinist who prefers to play music directly on the roof. In the way of the Jews this man was always noticeable. Without it, neither the birth of a baby, nor a funeral, nor such a joyful event – a wedding can be imagined. The image has become a symbol of a person’s life.

Chagall was a realist, at least he was sure of that. He seeks to model shapes using paints and their unusual mixtures. To emphasize the contours of the artist uses dark lines, as well as highlights of a light shade. The painter paints using the color itself. The tones are unusually thick and tart.

Before us is a violinist. He stands with one foot on the roof, and the other rests on the ground, which is depicted as a greenish circle. In his hands a juicy violin. You can see the church and the tree. Traces are clearly visible on the snow, as if someone had recently walked along it. A man flies right in the sky.

Young men are watching the violinist. There are three of them, but for some reason there are only two legs.

The violinist himself is amazing. He has blue hair and a beard of the same shade. The face is green. He is glad that he lives in the world. In the foreground – the yellowness of autumn, which gradually turns into the green of spring. And ends in the snowy winter background.

Chagall depicts all the buildings as if on the side. The composition becomes multi-storey. Wherever the artist conceived the separation of surfaces, he necessarily uses the contour.

Violinist artist depicted consisting of different areas. He marked them with different colors that define their belonging to a certain people. The picture is dominated by blue, green and orange. This is a real suite, written by an authentic master.

The picture is saturated with color. It is in it that the most powerful energy of the future is concentrated.