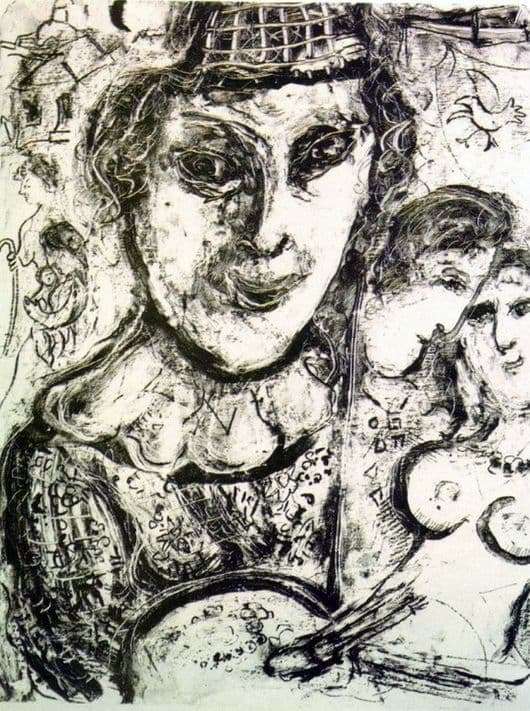 Strange author, strangely interesting canvases. The author, about which for some time it was impossible to speak in a Soviet country. Although he comes from here. His homeland – Belarus, the city of Vitebsk. His nationality is Jewish, and this nation can be called world. If only because there are quite a lot of Jews everywhere and everywhere. But not every Jew can reach the heights that Chagall has reached.

But he really achieved a lot, if he, it was only he, who was built in France, the workshop in which he lived and worked in recent years. He painted brilliant paintings. Suffice it to recall at least his “Flights”. So his self-portrait is quite original. It is made in a manner similar to Picasso, but it still has a lot of purely Chagall.

For example, images of figures and facial features. It is pure of him. He portrayed himself, but did not forget to remind everyone who he is – in his hands he has a palette and brushes.

A background are like pictures from the past and present. There is a place for motherhood, love, and home. He lost his family home, as soon as he went abroad, he was unlucky in love.

His first wife, Bella, he lost, she died in the hospital, and the second wife ran away from him, wanting a different love. But with his third wife, he seemed to have found something in common. But he always had the art of drawing and creating beautiful things.

He traveled a lot around the world. He worked in Israel, in the USA, in France. And this only added to his fame. In the end, in the Soviet Union, too, recognized his talent, and invited to her, providing pavilions in the Tretyakov Gallery for his personal exhibition. He was touched by such attention, and presented several canvases to the gallery. Among them was a self-portrait.

True, not this one, but still some, if only it was performed by the master himself. But that the Tretyakov Gallery, even if the Louvre has violated its rules and created an exhibition of paintings by the artist during his lifetime. It was something new for the Louvre, and the artist must have been pleased.