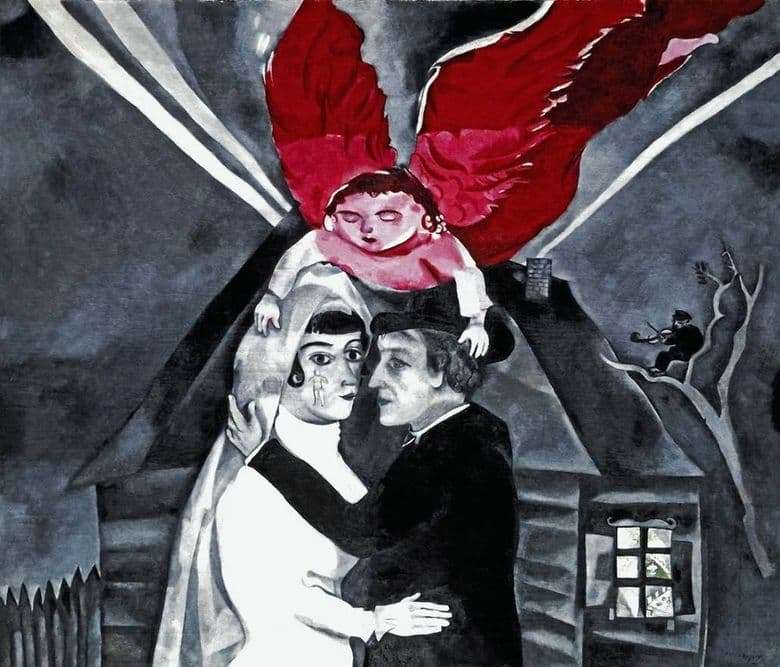 Mark (Movsha) Chagall received a traditional Jewish education, studied Hebrew and Torah. National self-perception has become the main theme of the artist. Most of his canvases are visualizations of images of Jewish folklore. Chagall’s style is so distinctive that it is difficult to rank him in any particular direction. Arriving from Vitebsk to St. Petersburg, the author studied at the school of Nicholas Roerich. At twenty-two, Chagall met his future wife Bella. From that moment on, Mark painted her – Bella on almost all his canvases. Beauty features are recognizable in the faces of women of all genre works of the master. Later he was married twice more, but only his first love remained a muse for the rest of his life.

For paintings by Chagall, a hypertrophied fabulous atmosphere is characteristic; in spite of this, the life and details of the interior are usually reproduced fairly accurately and in detail, and when

creating landscapes in early works he did use postcards of provincial Vitebsk. The author’s magic usually begins where feelings between a man and a woman arise; lovers often fly over the city or ascend to heaven.

In the painting “Wedding”, the viewer again sees a couple, in whose exterior Mark and Bella are easily guessed. The woman is wearing a wedding dress and veil; a man in a black suit hugs her, she put her hand in a snow-white glove on his waist. A baby is drawn on the bride’s cheek – apparently, she is dreaming of a baby. A plump angel with scarlet wings overshadows their union from heaven.

In the background is a log house; a bright light is burning in the window, and a table covered with dishes is visible, covered with a light tablecloth – everything is ready for the meeting of the bride and groom. A violinist in a cap, perched on a tree branch, as if a bird, is playing a young wedding march. The main color of the work is turquoise blue with a silver-gray tint, festive white details emphasize the solemnity of the moment.